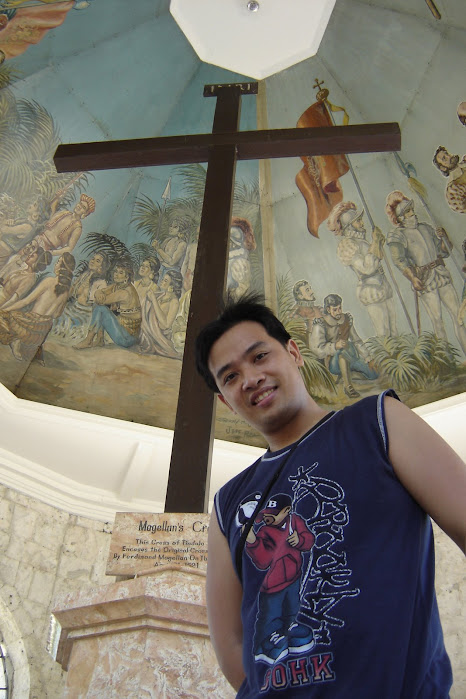 In continuation of our trip last September 2006 in the island of Bohol, our group of 17 people ferry ourselves to one of the key and most historical cities in the Philippines.  Cebu City is part of now the great metropolitan region of Metro Cebu which lies in the middle section of elongated island province of Cebu.

Cebu (pronounced as ‘Se-boo’) is the center of commerce and trade in the Visayan region of the Philippines and is connected to most domestic airports and some international airports through the Mactan-Cebu International Airport.  This makes Cebu as the second major gateway and second most important trade center of the country after Manila.  The Port of Cebu also connects the island to other islands in the country.

Aside from it’s importance in the Philippine economy, Cebu is also very rich in history as it is considered the oldest city in the country.  It marks its existence in history for more than 439 years ago, before the first Spanish expedition came in the islands in 1521 which led to the Philippines’ official discovery, putting it in the map.  The expedition led by Ferdinand Magellan that year has seen a thriving settlement with an organized social structure led by a datu.  And the settlement was already a center of trade by trading Chinese, Japanese, Malays, Indians, Burmese, and Arabs.

On 1521, the rajah of Cebu, Rajah Humabon accepted Ferdinand Magellan’s fleet and converted into Christianity and erected the a cross (later known as Magellan’s Cross) for its first mass.  But Lapu Lapu, the local chieftain of the neighboring island of Mactan did not receive the conquistadors warmly and killed Magellan on the shores of Mactan.  But this did not stop the colonization of Cebu when 45 years later the Spanish fleet of Miguel Lopez de Legazpi returned to annex the archipelago as a Spanish province.

Aside from its history, Cebu is also well known for its reverence to the image of the Child Jesus, the Señor Santo Niño and its grand celebration every January, the Sinulog Festival.

And so after three days in Bohol, we took a ferry ride from the Port of Tagbilaran on board a fastcraft of SuperCat.  Ticket costs about Php300 for the 1 hour and 45 minute ride across the Bohol Strait.

For our trip to Cebu I’ve booked 11 of us Mango Park Hotel and arranged for a 6 hour twin city tour package (Cebu and Mactan) from Cebu Tour Guide.  The tour package costed us Php 1,250 each with buffet lunch. 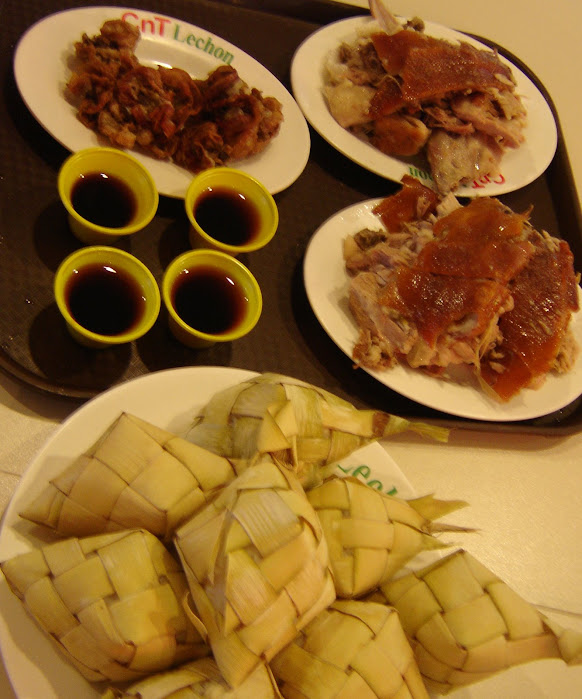 And so upon our arrival in Cebu around lunch time, 11 of us took a jeepney ride from the port area to Mango Park.  Our other 6 friends went a different way as they are going to a friend’s place.  Our first day in Cebu is a free time for everyone as we have not set any activity and so each had the day on their own.  Upon check in some of the guys decided to take some rest while the others decided to go to the dried fish market.  Dried seafood is one of Cebu’s famous delicacies.

Since it was already lunch, Jen, myself, and some of the guys decided to have lunch at Ayala Center.  We were in search of one of the best food locally and so we purchased our food from CnT Restaurant.  It is famous for serving the best tasting Cebu lechon, and indeed their’s is very tasty compared to the lechons cooked here in Manila.  Lechon is a seasoned pig roasted over fire and is a favorite party food.  A celebration in the Philippines cannot be special with a lechon in the menu.

After lunch Jen and I proceeded on exploring the city while the other guys head on back to the hotel to get some rest.  And so we decided to check out SM Cebu, Fuente Osmeña Circle and then the Cebu Capitol at the end of Jones Avenue.  Going around these places was very tiring that we decided to retire to the hotel afterwards around 4pm. 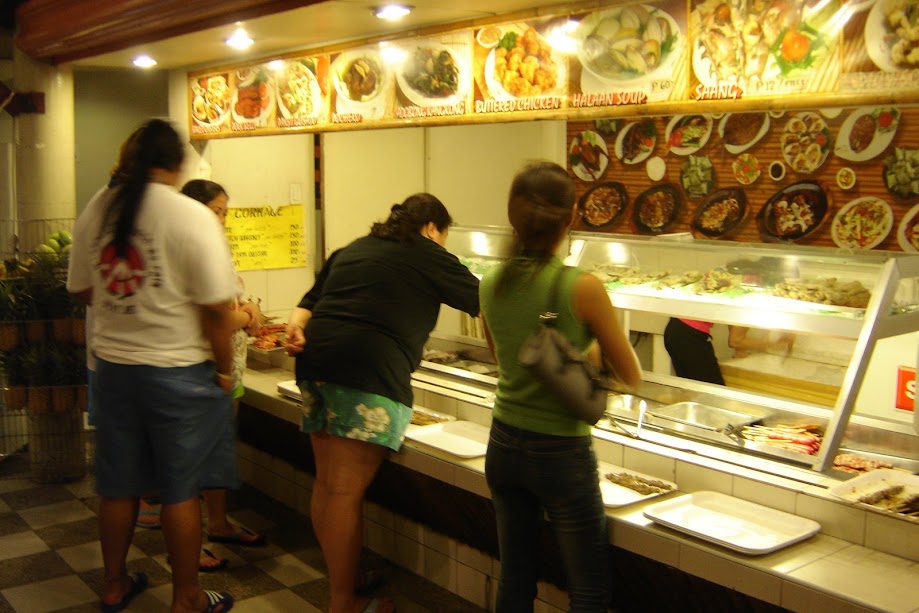 Ordering fresh seafood in the SuToKil 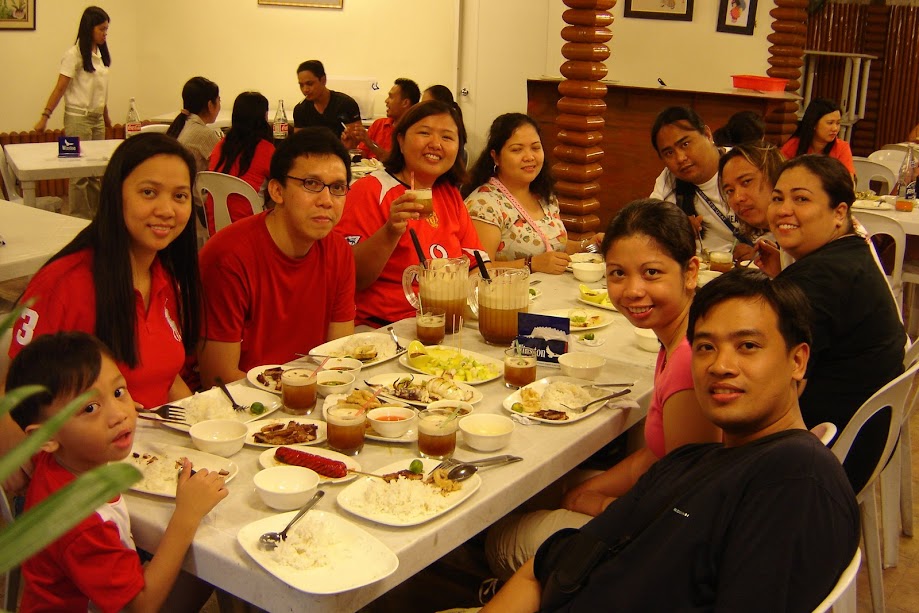 We only went out at night for dinner to yet again try something famous in Cebu, the sutokil. Sutokil stands for SUgba (‘grilling’), TOla (‘making soup stock’), and KIlaw (‘cooking raw food’).  Sugba is the common grilling of seafood or meat on charcoal, Tola is making a broth soup from your meat, while Kilaw is preparing seafood with vinegar and spices without cooking on fire.  These are three common cooking techniques famous to local Cebuanos.  And so, the style of eating in a sutokil is almost the same as the ‘paluto‘ style in Manila where in the customers orders for fresh seafood, meat and vegetables and asks the restaurant to cook them in your choiced viand type.  And so, there is a small fresh market within the same compound of the restaurant.

After having dinner we took a short walk to check out the Waterfront Hotel and Casino just to check out the Casino Filipino.  We did not stayed there for long but just took some pictures then retired back to the hotel. 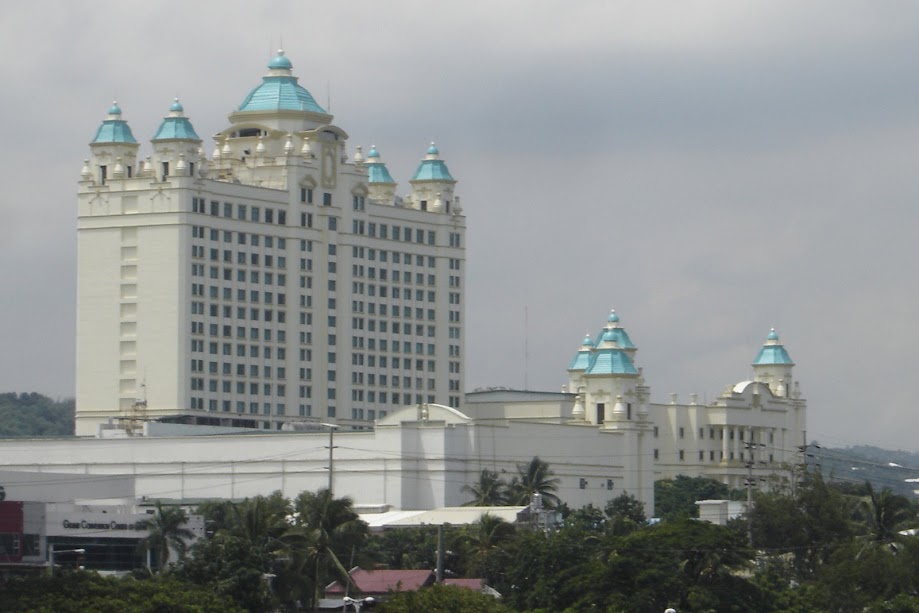 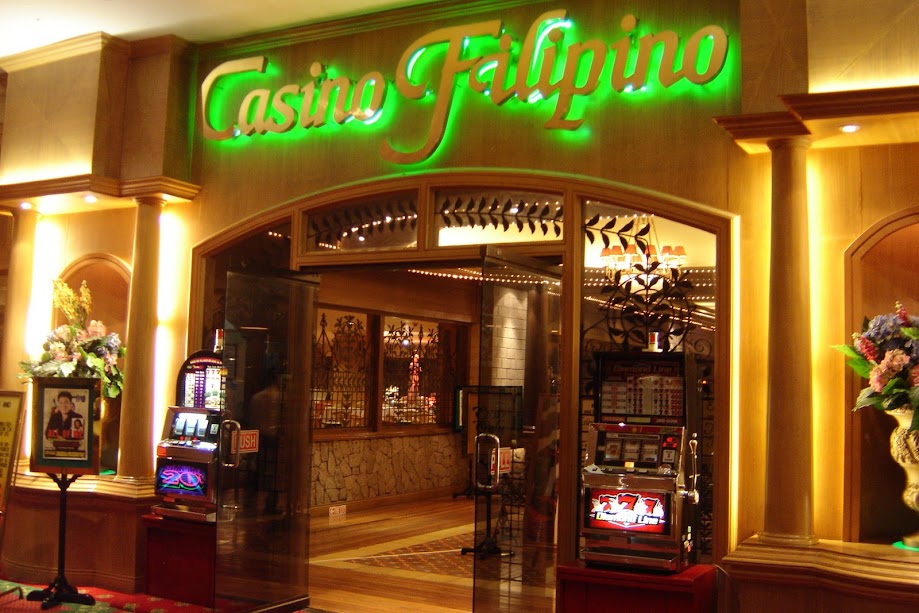 On our 2nd day in Cebu, our tour guide picked us up from our hotel to start our tour of the city.  And on our first stop is at the Taoist Temple on the hillside above the city.  The temple is located in one of Cebu’s hilly villages and it had a bird’s eye view of the whole city.  We stayed for a few minutes on site while every have their pictures taken with the view of the pagoda and the big dragon on one of its sides.

After that, on our way down to the city, we passed by the Parian Monument.  This monument depicts the different events in the history of Cebu.  One side depicts the arrival of the Spanish galleons along with the colonizers.  On top is the cross of Magellan.  Another side shows the resistance from Lapu Lapu.  Another depicts Cebu’s reverence to the Santo Niño. 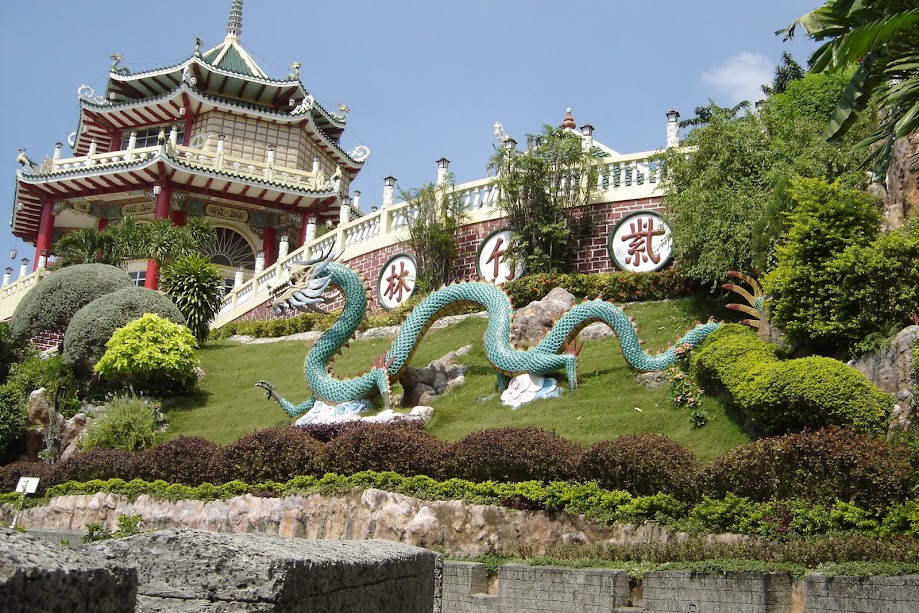 Taoist Temple at the hillside of Cebu 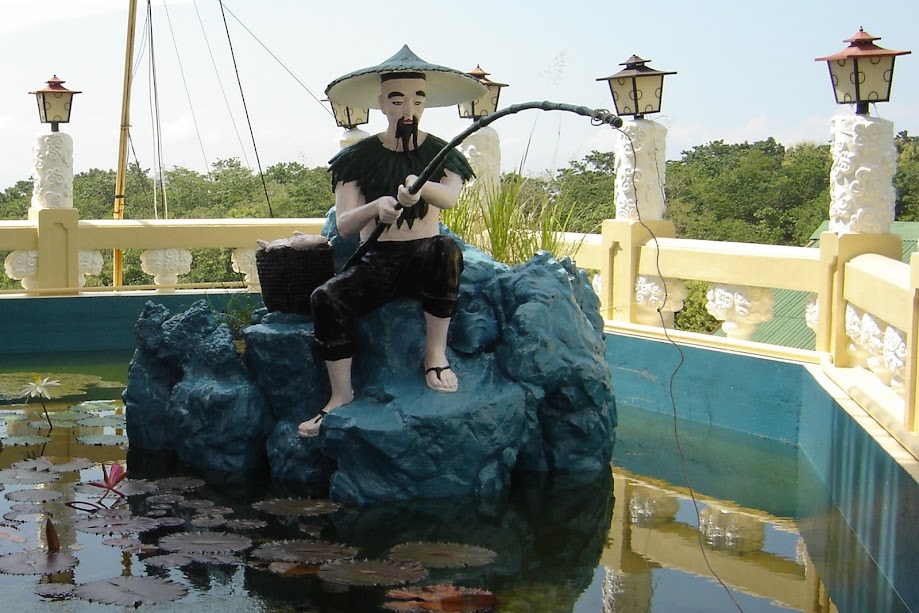 A Fisherman statue in the temple grounds 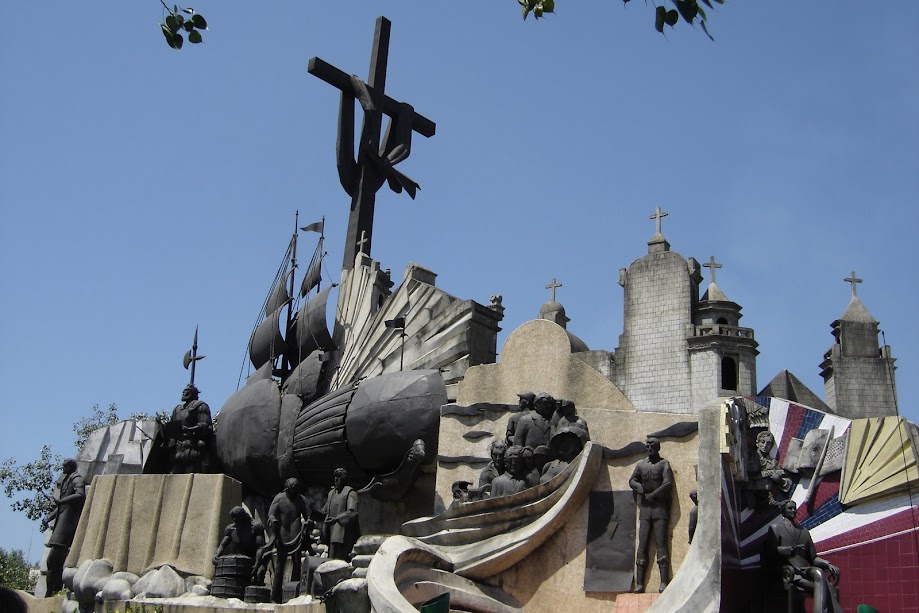 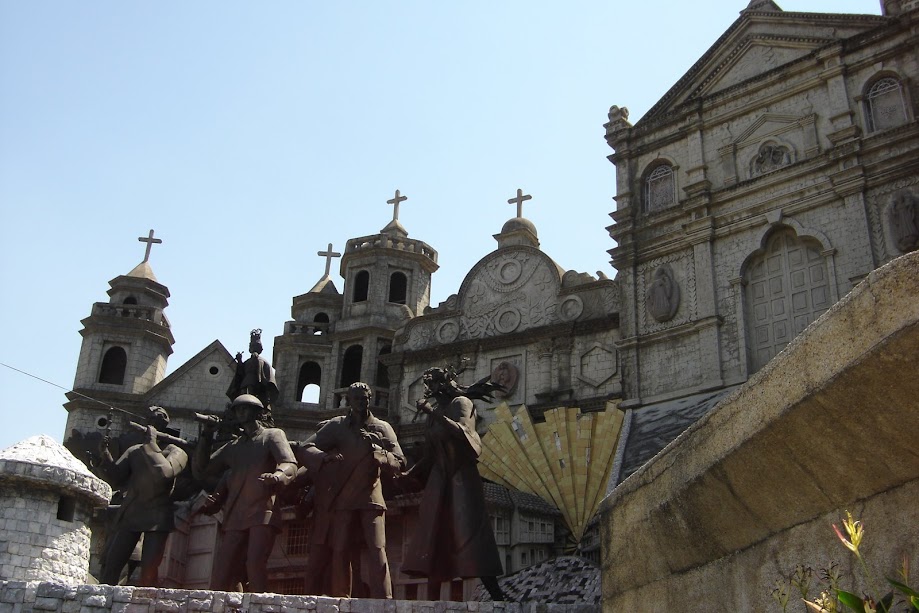 the other side of the Parian Mural

Then a few minute drive from the site, we headed to the old city center take the chance to see the Magellan’s Cross.  The Magellan’s Cross commemorates the erection of a cross by Magellan’s men when they celebrated their first mass on the island and Rajah Humabon and his family and friends were converted into Christianity.  The cross on site encases the original cross planted by Ferdinand Magellan’s men on the same site in 1521.  And it is housed so as to protect it from weather. 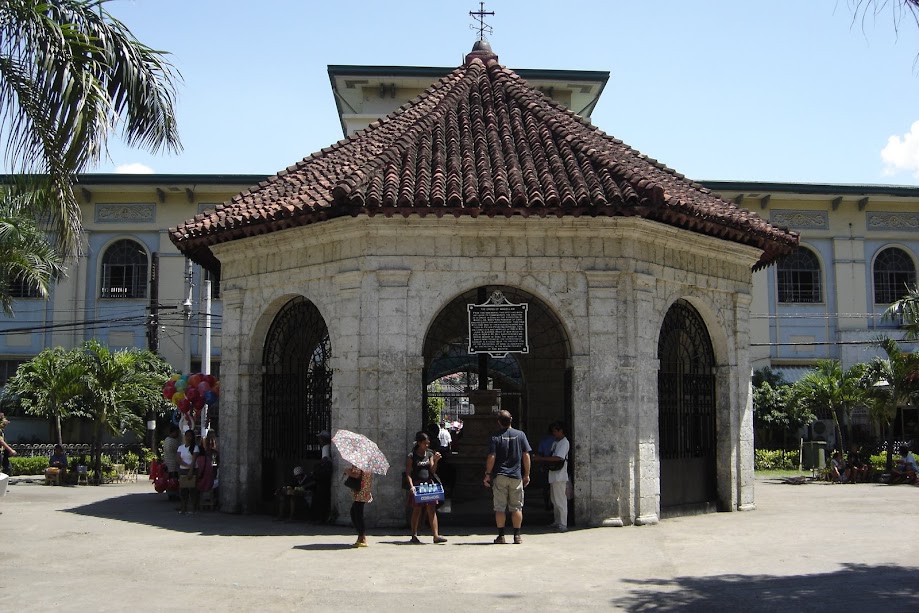 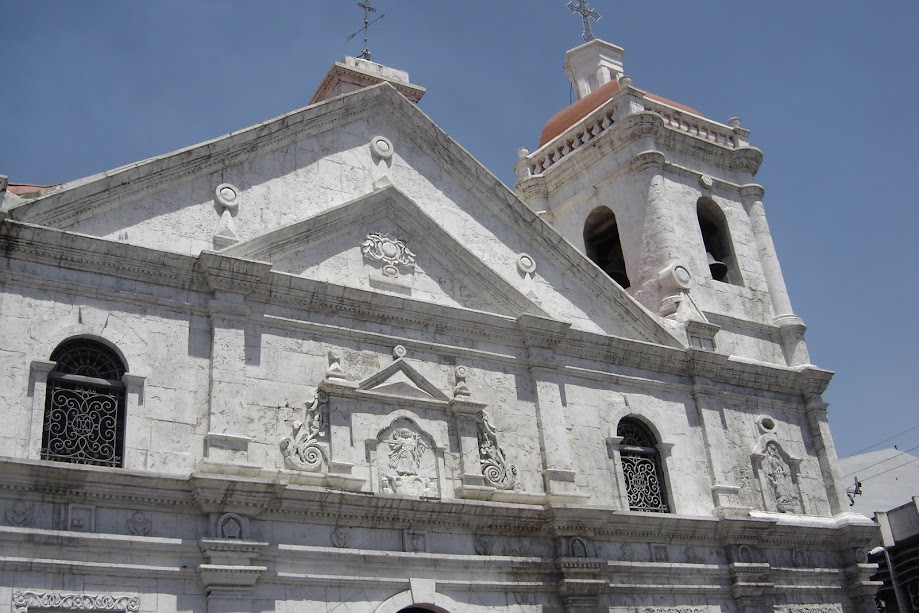 Right beside the cross stands the Basilica Minori del Santo Niño where the miraculous Santo Niño de Cebu is enshrined.  The relic of the Santo Niño in the basilica is the oldest religious relic in the country and was brought here by Magellan’s men from Spain.  It was given to Reyna Juana, Rajah Humabon’s queen, as a gift in their conversion to Christianity.  It has become the most venerated image in Cebu and the rest of the country for miraculously surviving recurring major fires that burnt the Basilica over the course of time.  The basilica had been rebuilt every time.  And with the great reverence of the people of Cebu, every third Sunday of January, one of the grandest and most colorful Philippine festival is held to celebrate Señor Santo Niño’s feast called the Sinulog.

Then not far from the Basilica is the Fort San Pedro, a small tri bastion fort which served as a Spanish garrison.  It was founded in 1565 by Legazpi and it guarded the city from moro marauders coming from the sea.  The fort also had served its place during the Japanese occupation during WWII. 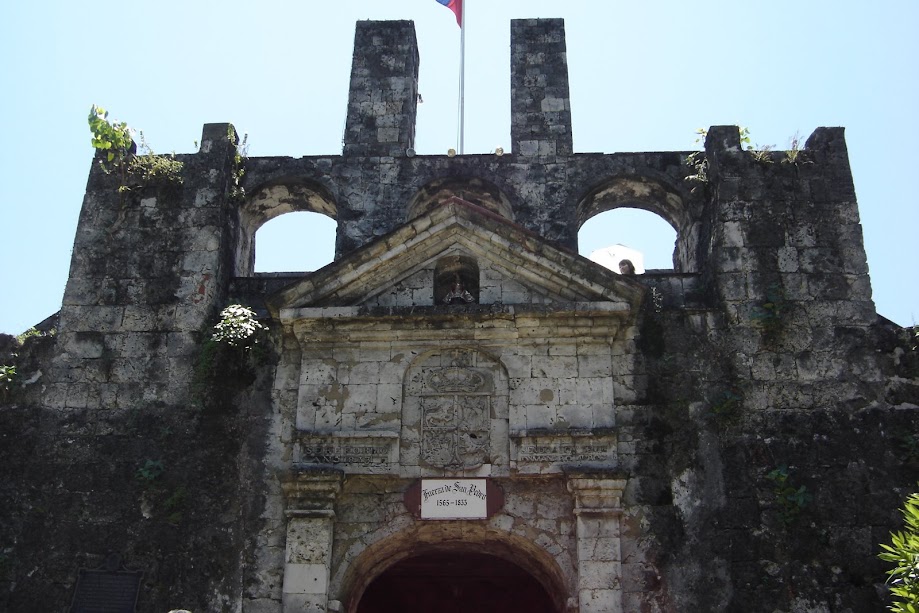 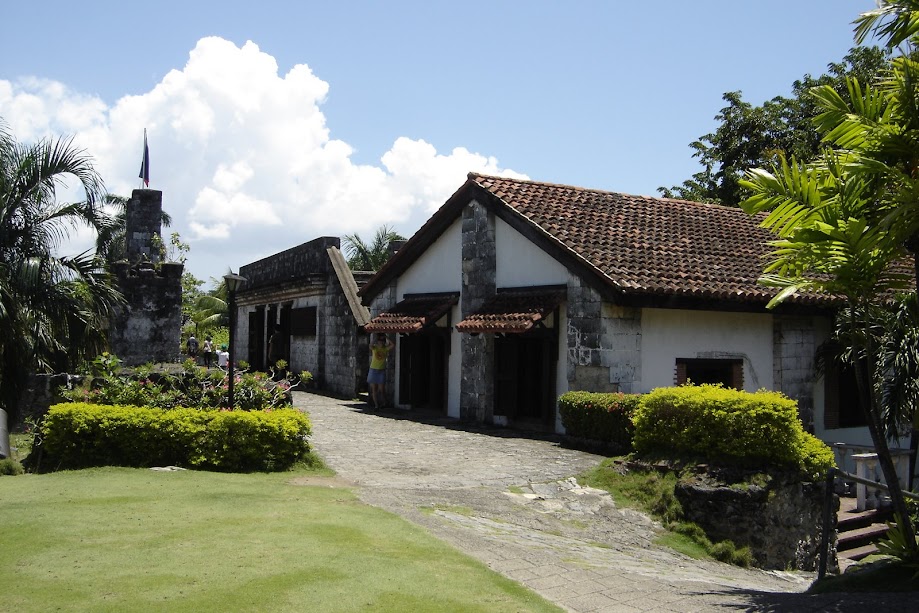 within the Fort San Pedro 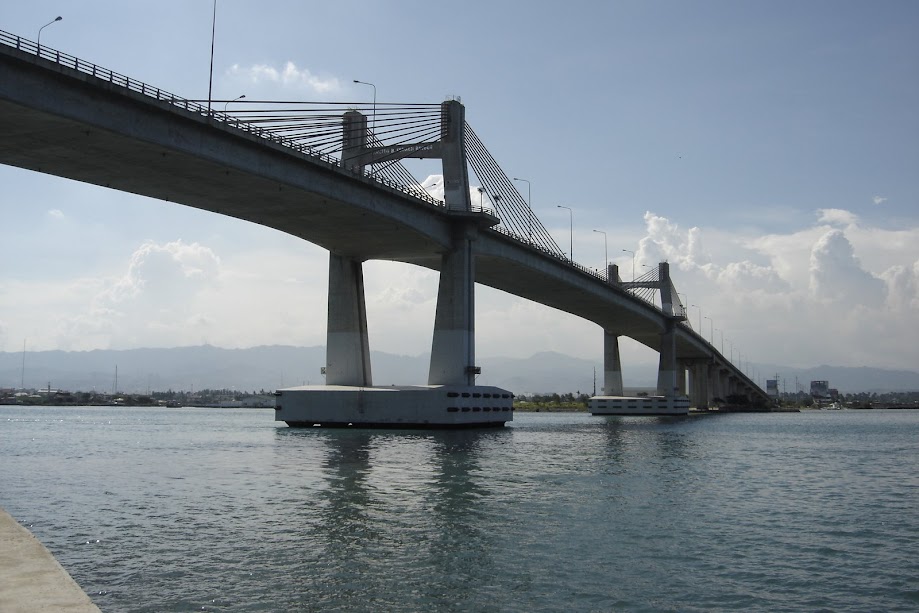 Next, we headed of to the island of Mactan across the Mactan Channel.  The island is connected to the city by two bridges, the Mandaue-Mactan Bridge and the Marcelo Fernan Bridge.  Mactan has become Cebu’s main resort island as a big number of hotels and resorts has lined up along its shores.  Also, the Mactan-Cebu International Airport is located within the island with domestic and international connections to the following: 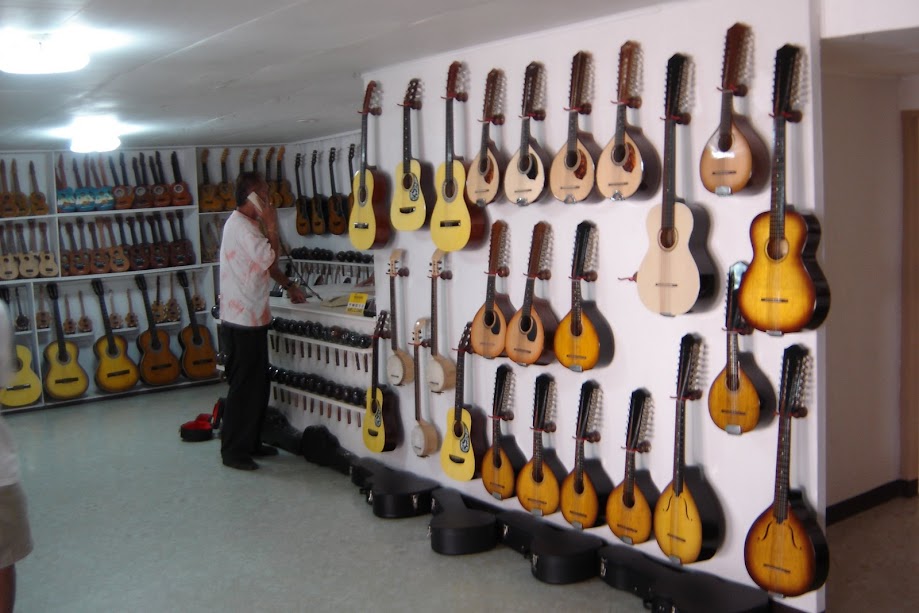 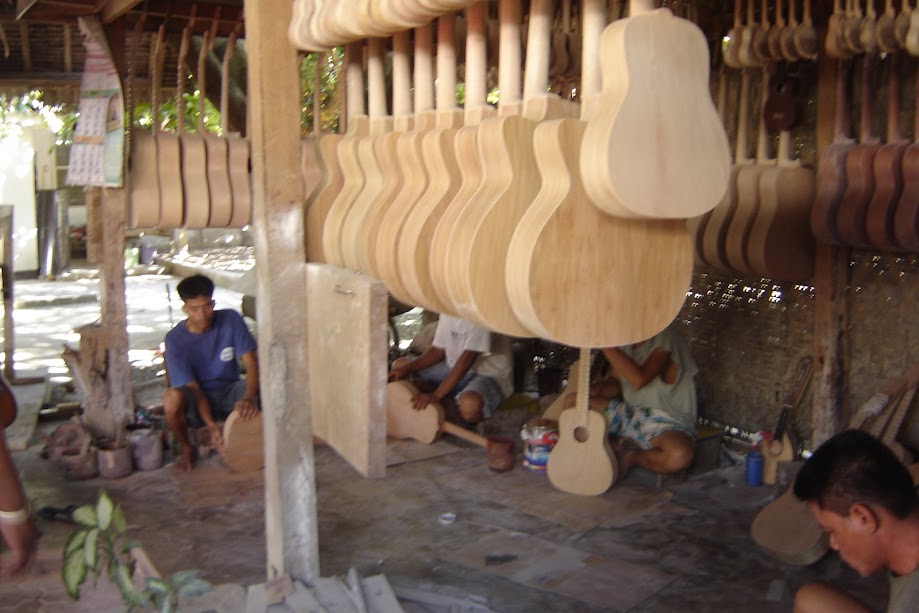 And so on Mactan, we first stopped at the Alegre Guitar factory.  Guitars are one of the known handicrafts produced by Cebu.  At the factory, a guy guided us through the process of making guitars from shaping up the body, to making the cords and polishing it and making ready for sale.

Next we headed to the historical markers where Ferdinand Magellan set foot on Mactan where the battle of Mactan with Lapu Lapu’s warriors.  On the northern point of Mactan island at Punta Engaño, two historical monuments stands.  Magellan’s Marker was erected in 1866 to mark the spot where the explorer Ferdinand Magellan died, while the Lapu Lapu Monument marks the location where his men and Magellan’s fought on the shores of Mactan.  Lapu Lapu is depicted in his warrior suit with his sheild and machete. 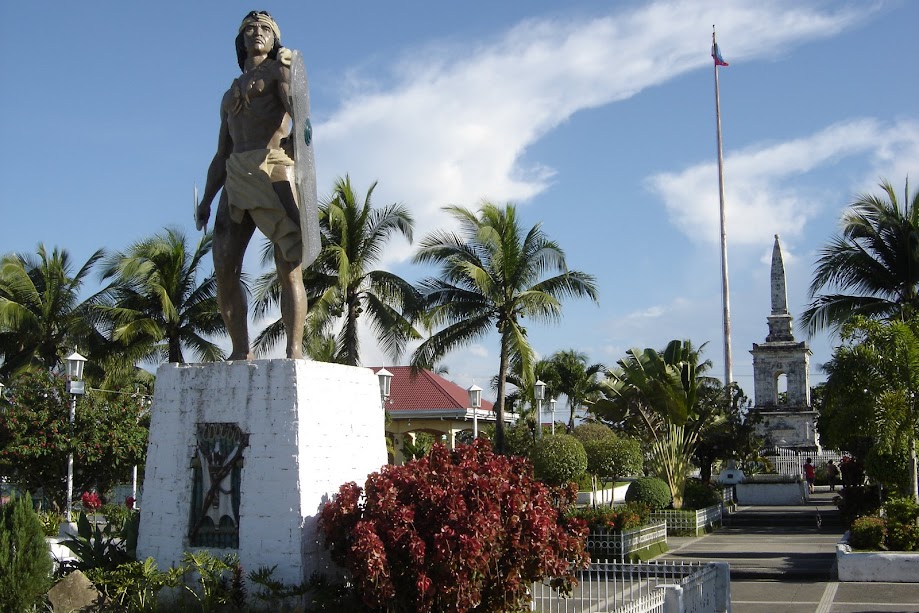 Lapu Lapu’s Monument and the Magellan Marker on Mactan island 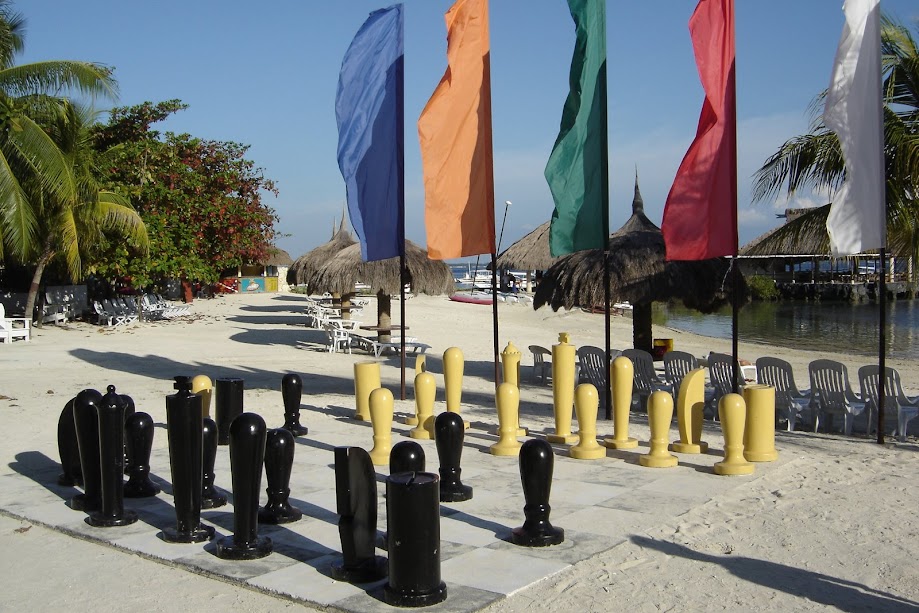 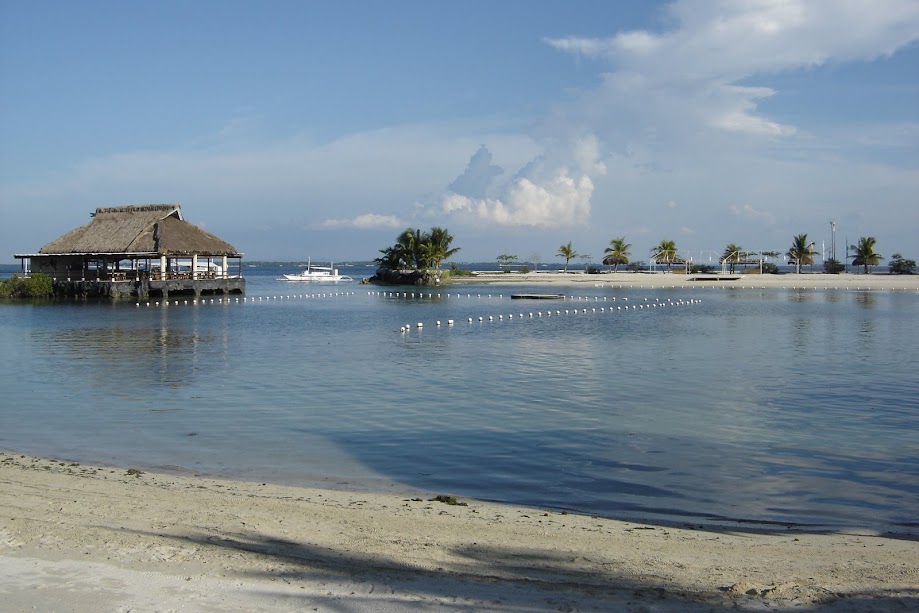 And before we end our tour, our guide gave us a sneak peak at one of the prime beach resorts on Mactan, the Maribago Bluewater Beach Resort.  It was a very relaxing resort with white beach and clear waters.  It offered different water activities, it had a big chess board and a shark pool.

Since we end our trip in Mactan and we have already brought our bags when we started the tour, we have requested our guide to send us directly to the airport to bring us back to Manila.  It was a short trip but it was a good one specially that we were able to see the best of Cebu.