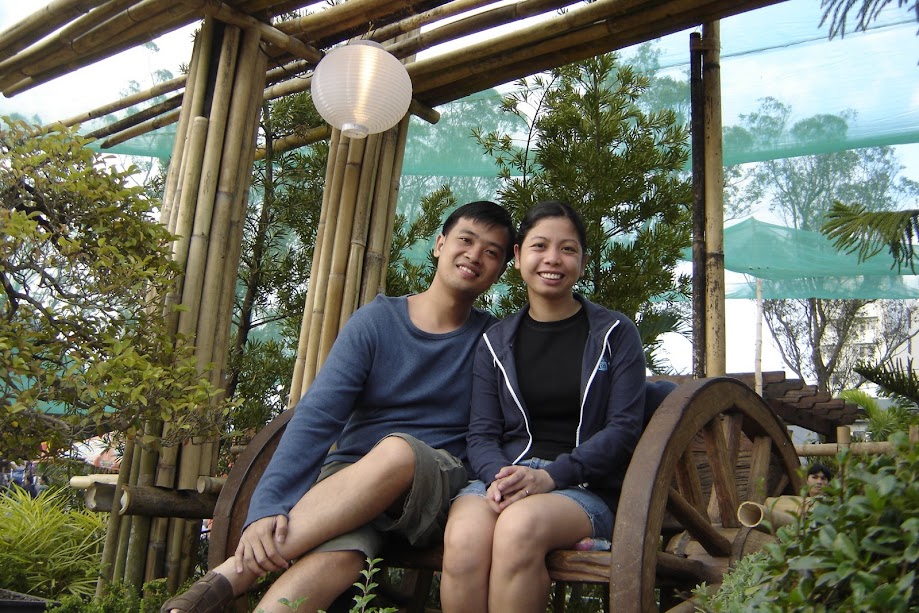 The whole year round, cities and towns around the Philippines celebrates a festival or fiesta in celebration of their patron’s day, cityhood, or for other purposes. And among these different festivals, the hilly city of Baguio at the Cordillera Mountain Range celebrates one of its own, the Panagbenga.

Panagbenga, which meant ‘season of blooming’, is celebrated annually during the month of February by giving tribute to one of city’s main produce, flowers. Baguio City is blessed with a cool weather year round making it a good planting ground for flowering plants. During the festival, the city’s main commercial street of Session Road is closed from vehicular traffic to give way to the celebrations.

A parade of dancers and performers from the city, neighboring towns and tribes join in the celebration. And, a number of floats made fully by flowers are paraded on Session. The flower filled floats may be compared with the floats during Pasadena’s Rose Parade, but Baguio’s floats are smaller and less intricate. The festival usually lasts for a week, with the parade of flowers being done on the last day of the whole celebration. 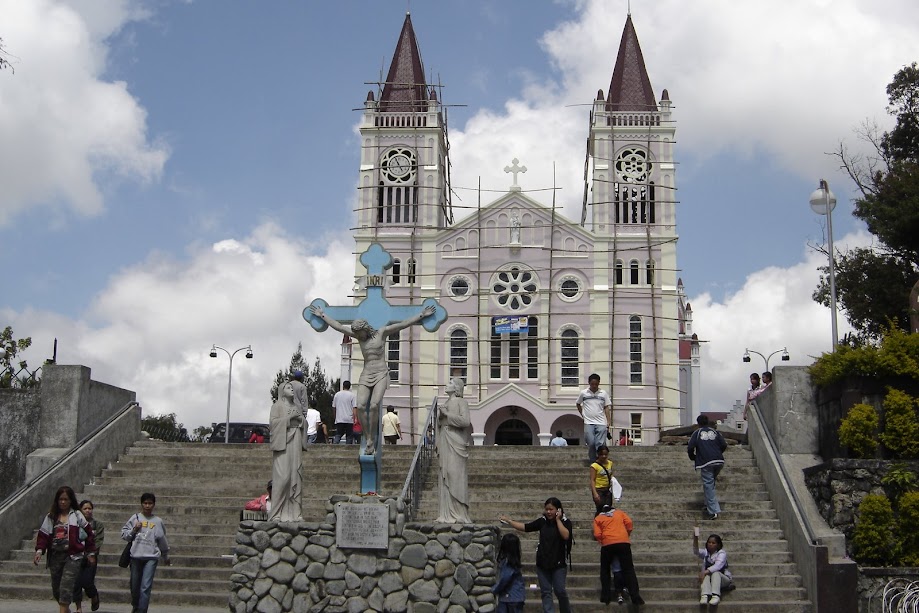 Our Lady of Atonement Cathedral (a.k.a. Baguio Cathedral) 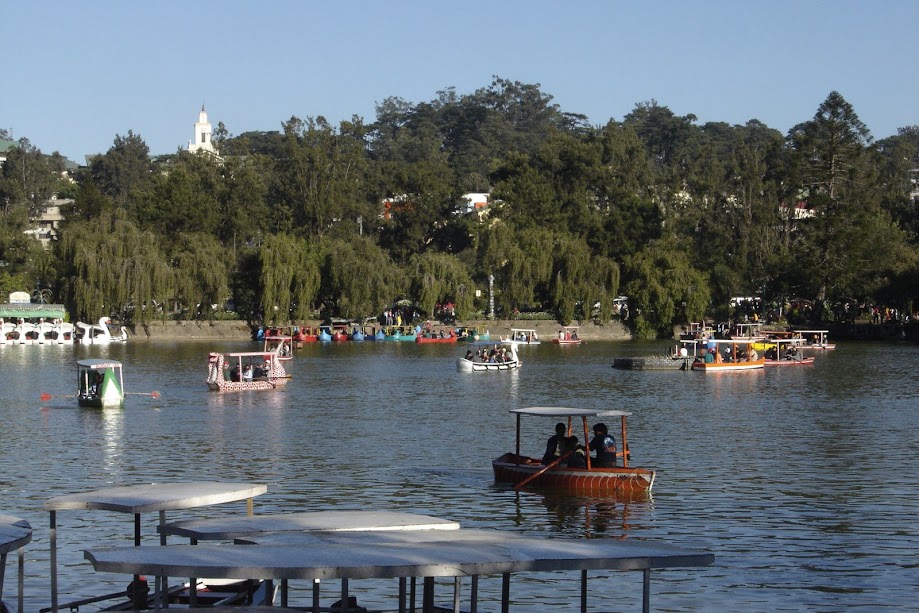 Baguio. is known as the City of Pines and is located at the province of Benguet in the Cordillera north of Manila. The city is about 6-7 hours drive from Manila. For its cooler weather, the city has attracted many visitors from Manila and other low lying towns specially during the hot summer season, dubbing it the Philippines’ Summer Capital.

And so, in February of 2006, my then girl-friend decided to take a chance to experience this festival. That was my first time to experience one. From Manila, we bought our tickets from Victory Liner in their Cubao terminal. We took a late night trip so that we arrive in Baguio around 6 am.

We came to Baguio without any accommodation and so we relied on looking for one upon arrival at the bus terminal. From the terminal, we went to Burnham Park, the city’s central park, where we met a guy who can provide us a room to stay in. After making arrangements, we told him that we’ll meet him around lunch time as we are going to watch the parade at around 8AM. 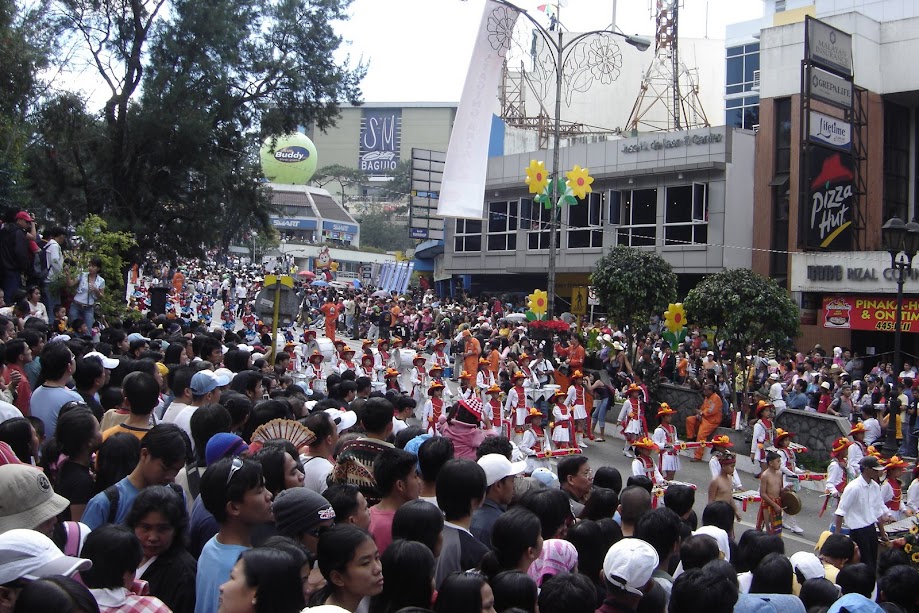 the parade on Session Road 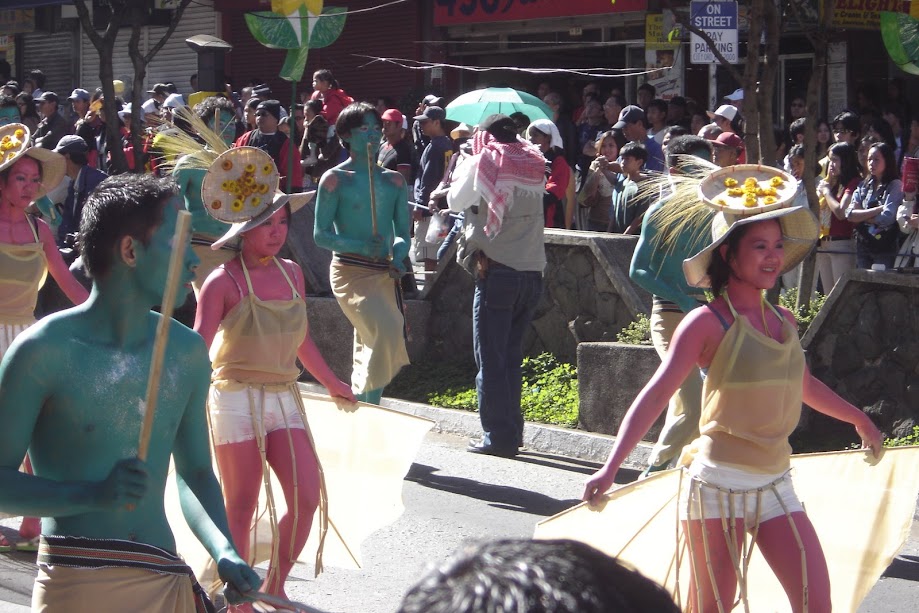 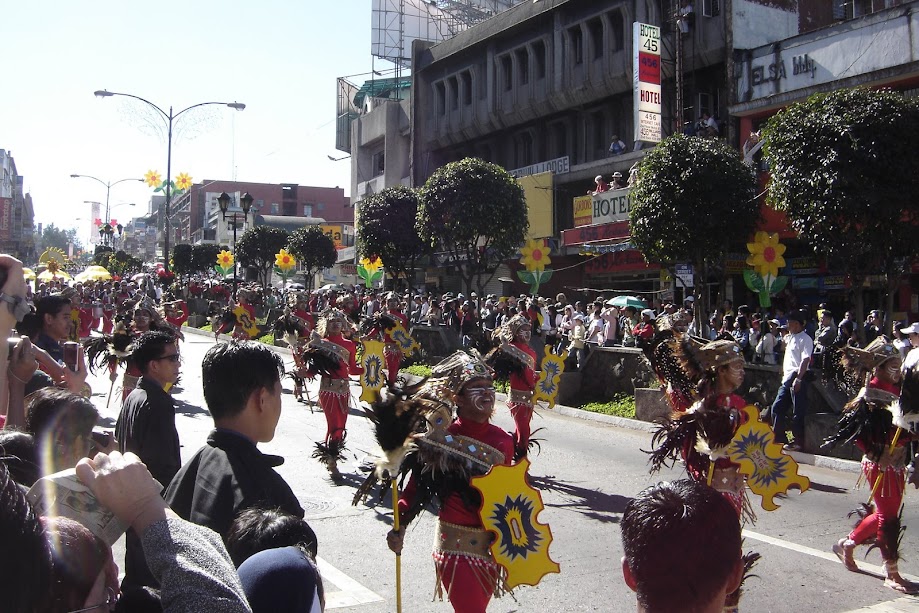 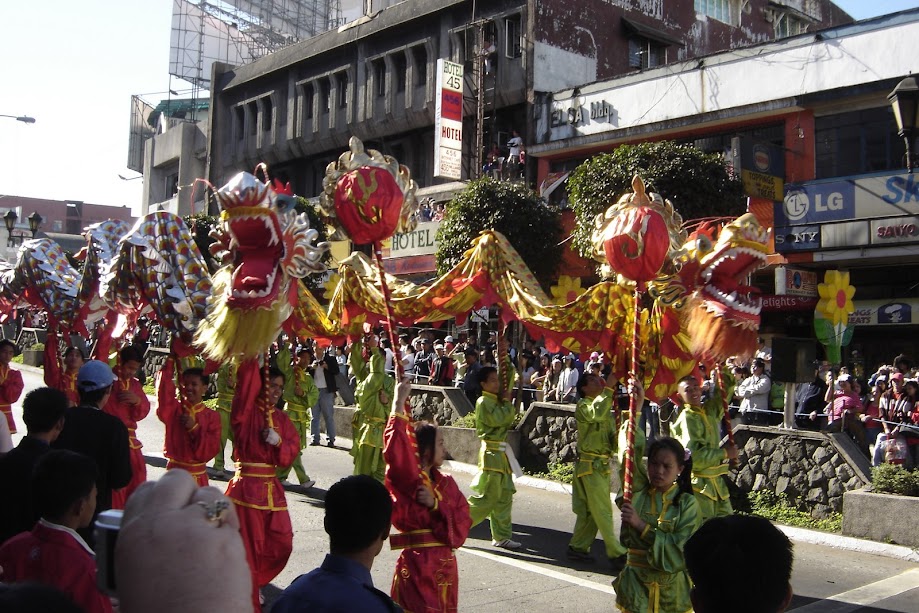 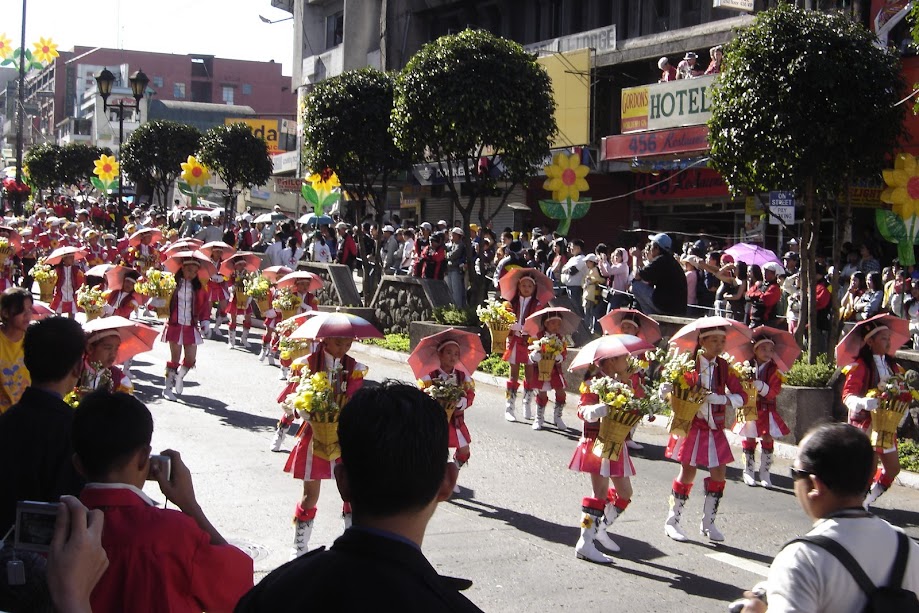 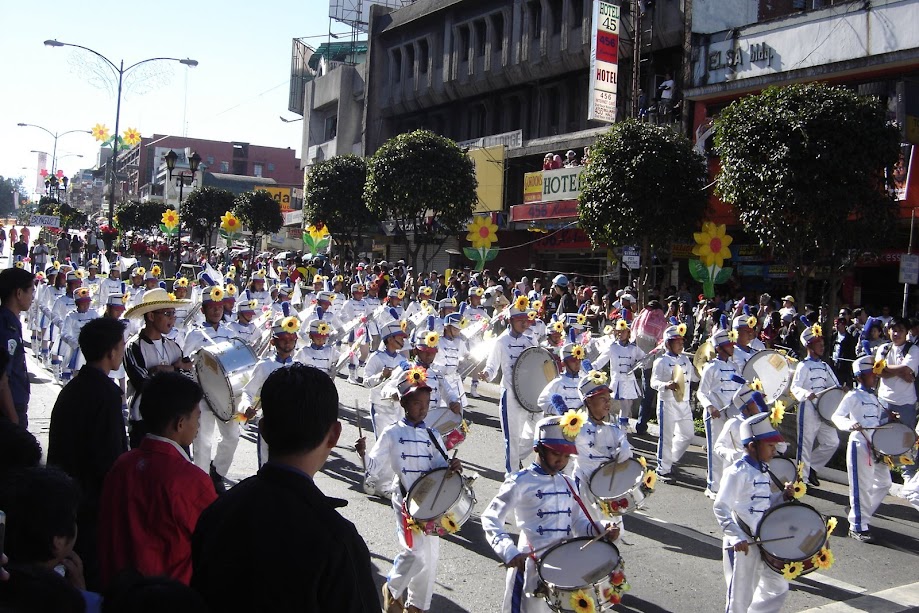 a marching band in white uniform

And so, we walked straight to Session Road as we wait for the parade to start. It was a clear day and a good one for the first day of the parade. Session Road is now packed with tourists and spectators. And then the parade began.

It was started by a guy on a military jeep, then a horsed police man, then the marching band of the Philippine Military Academy (PMA) and the Boy Scouts of the Philippines (BSP). They were followed by VIP guests, and the Japanese community, followed by a Dragon Dance group and a group old women doing tai chi. 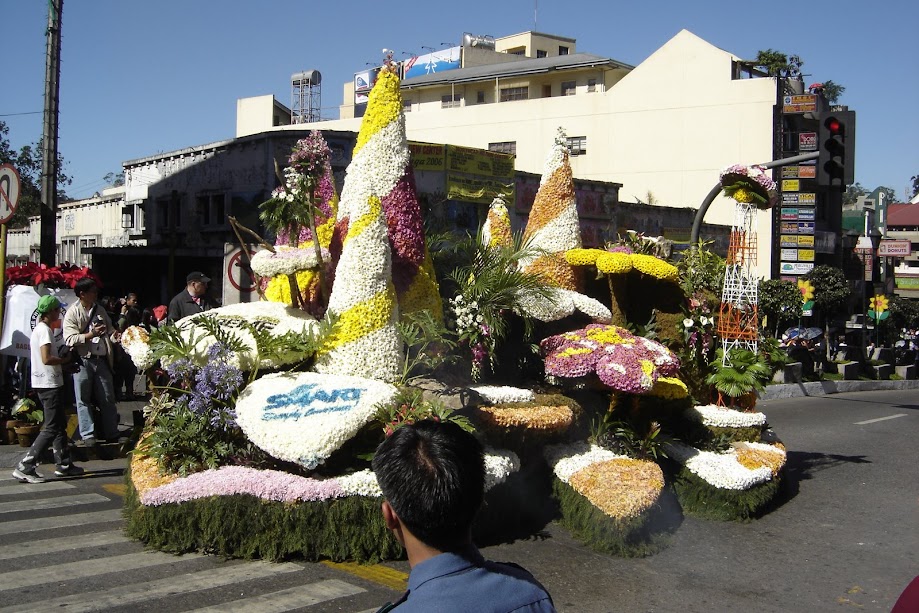 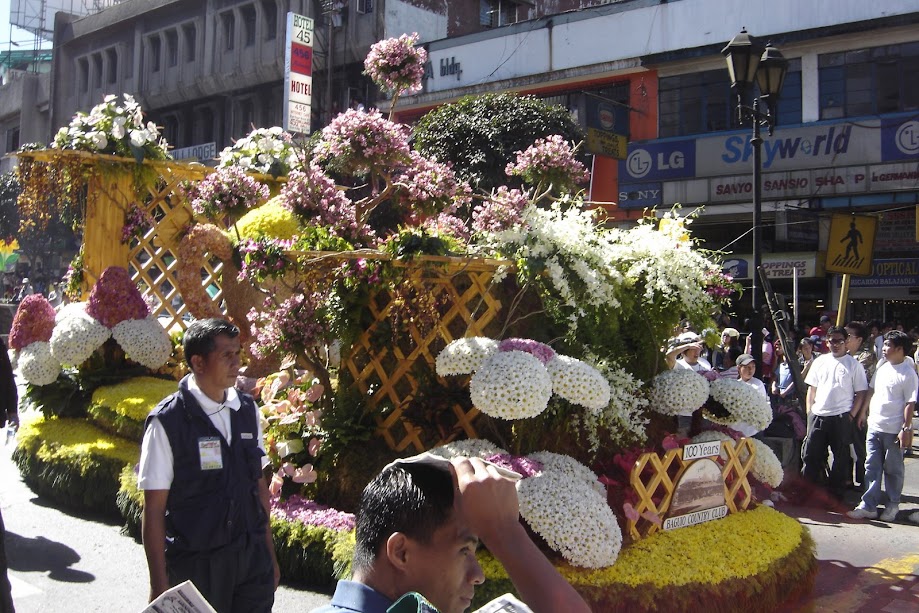 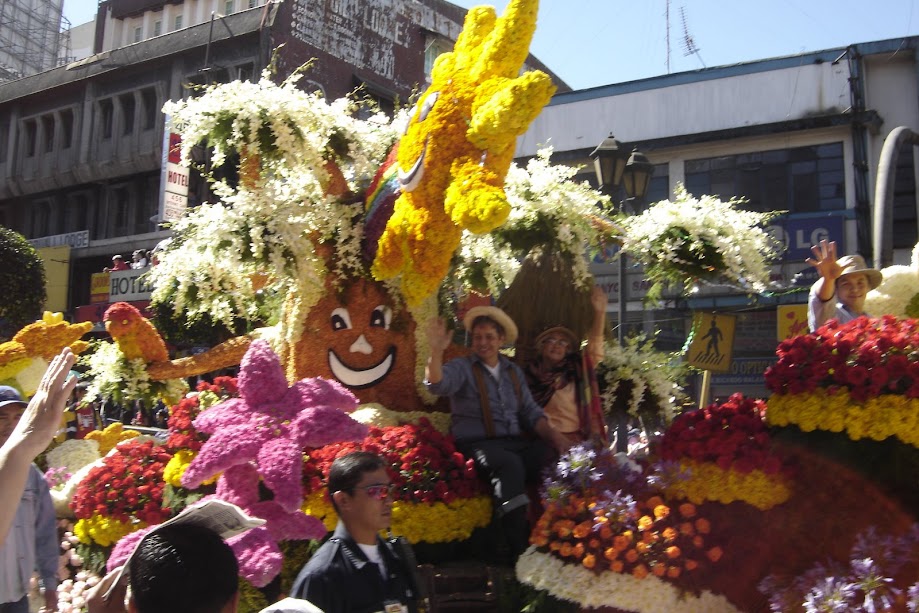 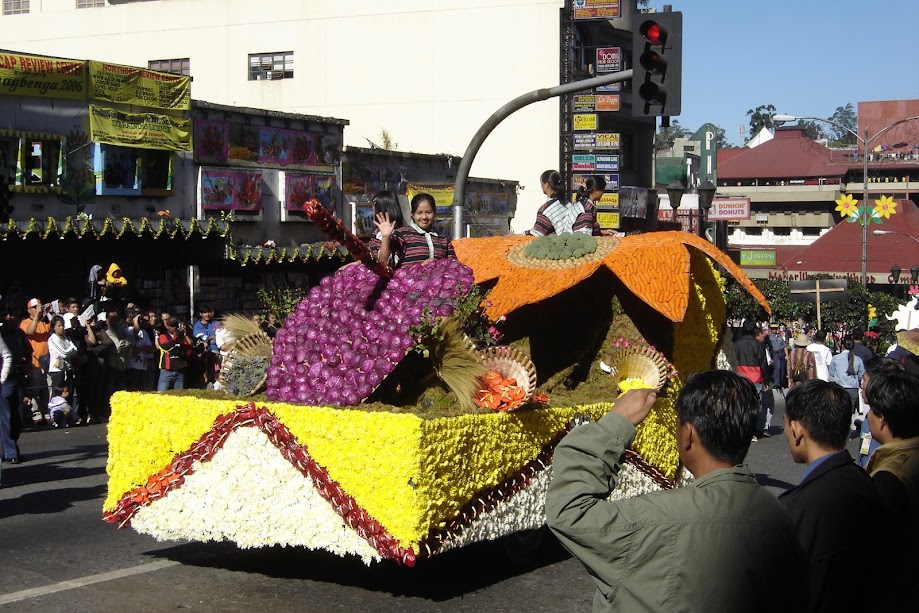 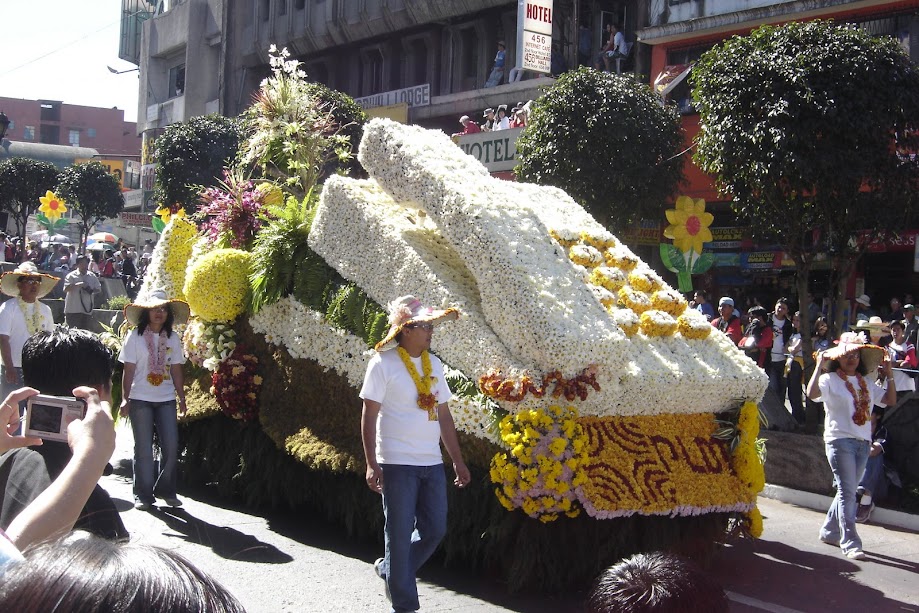 a telephone float by PLDT 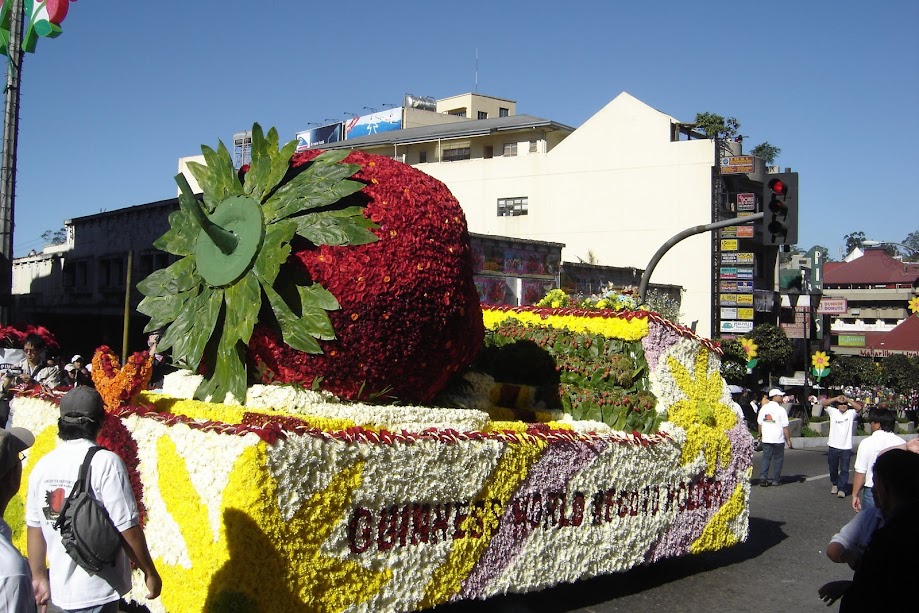 The next groups that paraded were represented by the different municipalities and towns of the Benguet province, to which Baguio is included. Each feature a band of children dancing on the streets dressed colorful costumes, some with flower designs, their marching band, and of course their flower-decorated floats. There were also groups of children dancing in their tribal costumes (in loin cloths).

Each group played good music and showed good dancing performance. And since Session Road is sloping down hill, the drums of the marching band had wheels and are attached to their drum players for easy use. 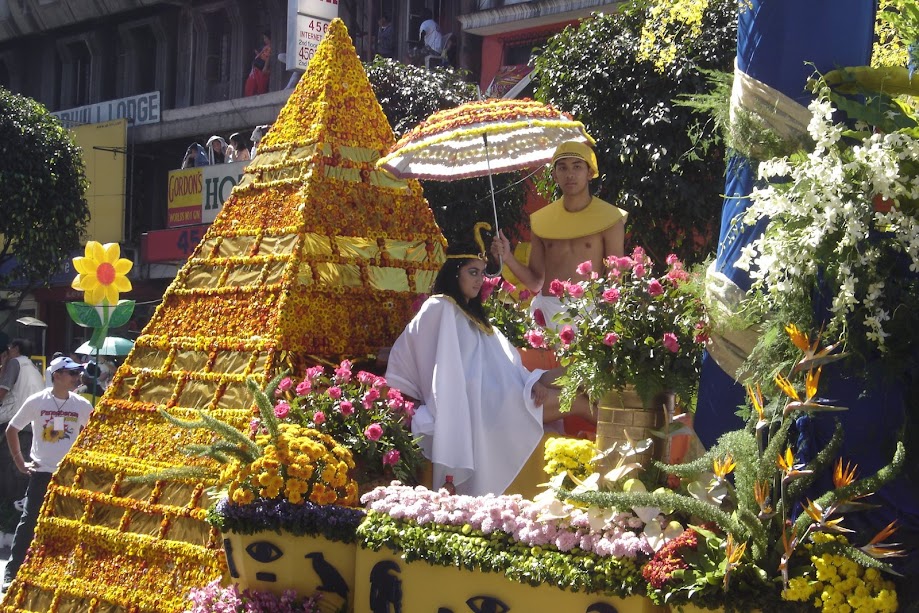 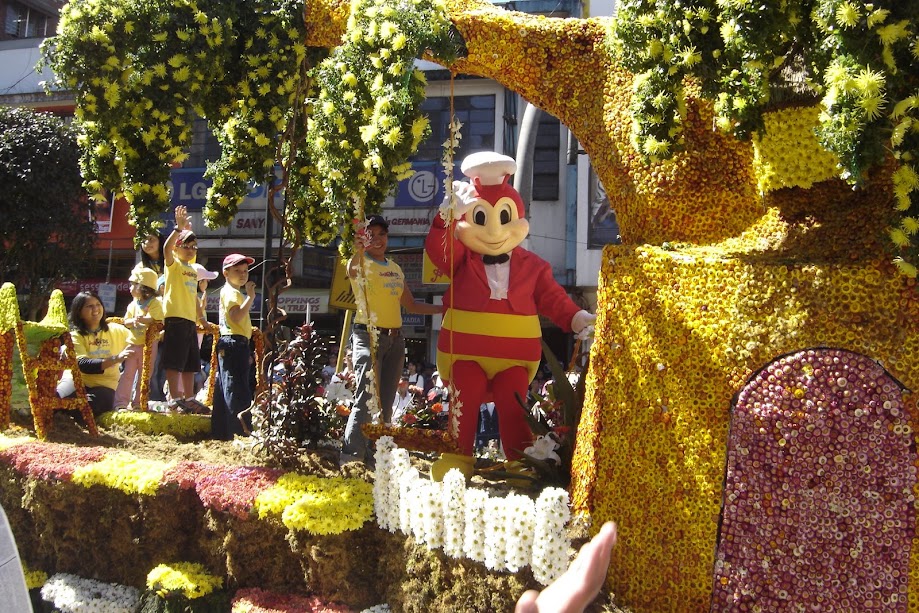 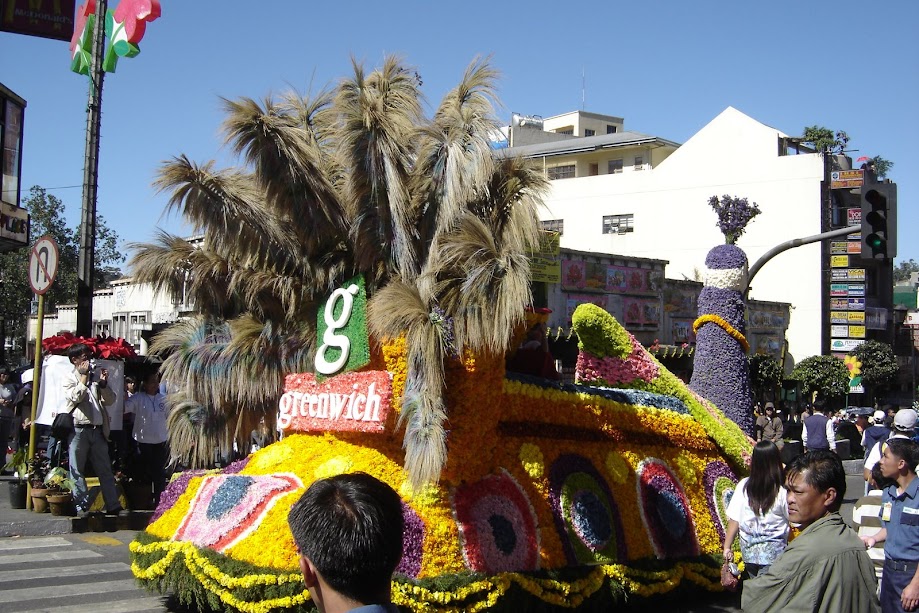 Aside from each town’s representative to the parade, there were some circus guys who joined and some sponsored floats by local business like Jollibee, Chowking, Greenwich, STI, Sun Life, Pidro Feeds, A.M.A., PLDT, Total Gas, Fitrum and even the Pinoy Big Brother show by ABS-CBN. All flower-filled floats were paraded on this first day of the festival which took about 3 hours long. It was such a great parade and the crowd loved it.

After the parade, Jen and I went back to Burnham Park to meet up with our agent for our room and head on to settle down. Since Panagbenga was such a hyped event in Baguio, most hotels and pension houses around the city were fully booked. The city was too full that we got a room that is not too near from the city center. Our room is adjoined with another room where another couple has taken and we all shared the whole house, kitchen and bathroom. It was okay as the other couple did not stay much in the house. The house was also situated on top of a hill where we’d walk down a steep street to get a ride to the main road. 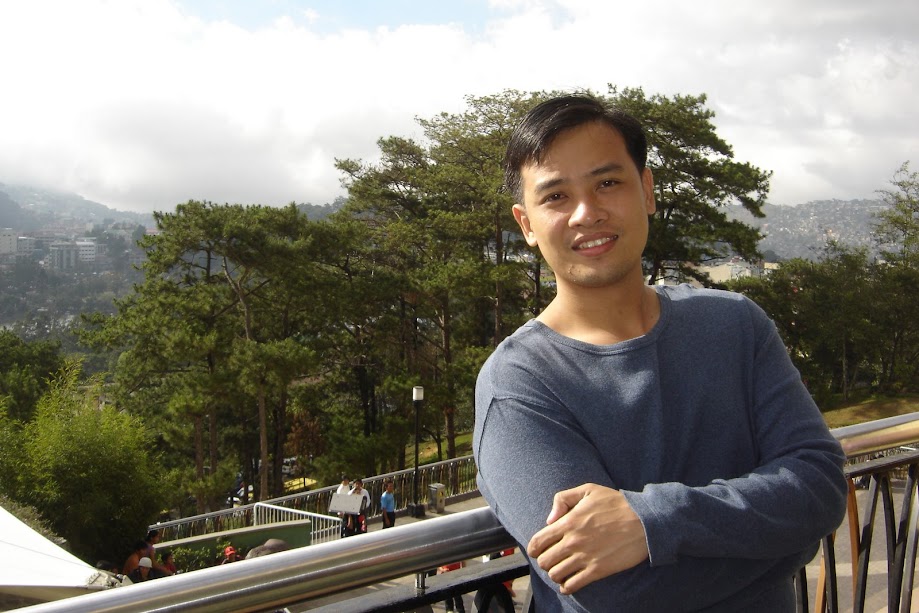 view of Baguio from SM 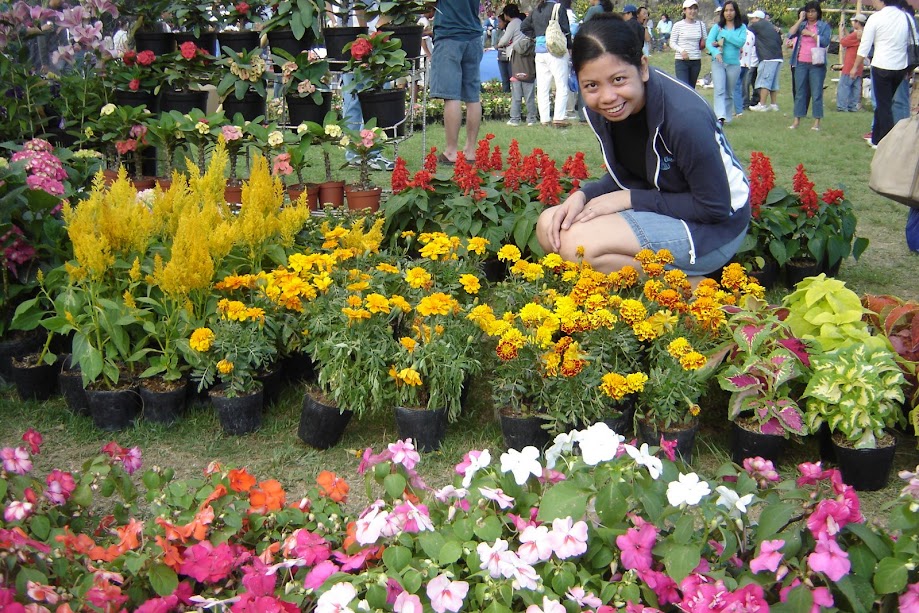 Jen with the flowers in Burnham

After settling down, we both went back to the city center to the then new SM Mall on top of Session Road. This mall took advantage of the natural cold weather of the city that it was not air conditioned and it had verandas that offer a great view of the whole city. Then from there we again walked down Session Road to Burnham Park near the grand stand. On the site, people gather around different landscaped designs by contestants for the Landscaping contest as part of the festival. We had the chance to have pictures in them also.

Right before sunset, we walked by the pond in Burnham Park where Jollibee‘s Hope Floats program where they lit up floating candles and let them float around the pond area. And so as night falls scattered floating light are around the pond. And to close the event was a beautiful fireworks display.

The next day, again we both went back to Session Road for the 2nd day of the parade. This time the parade is mostly participated by bands and dancing groups in the tribes within and around Baguio. And this one is much different from the day before. Anyway, this time we found a spot on the top end of Session Road. This parade is televised by the local TV network also. And some of the floats that paraded the day before also joined the parade. 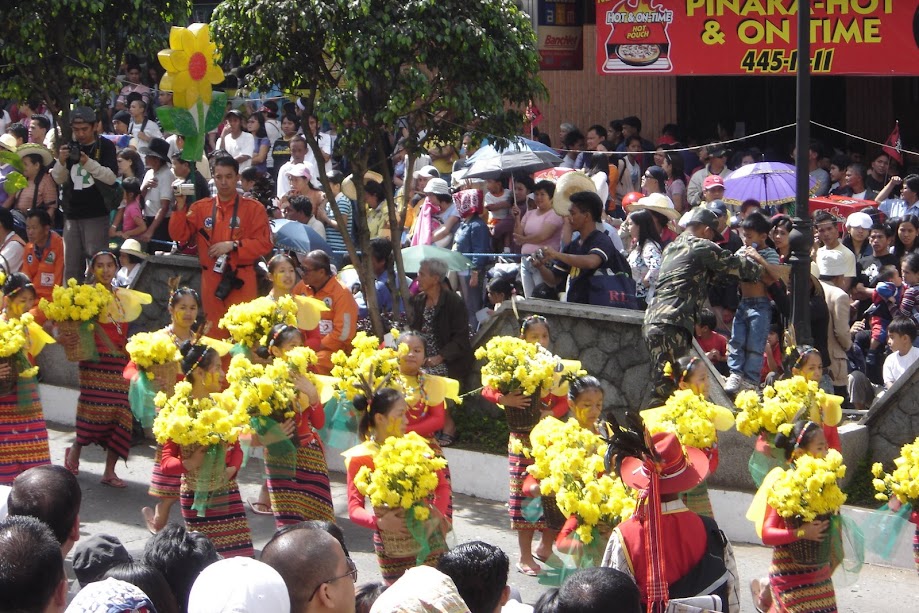 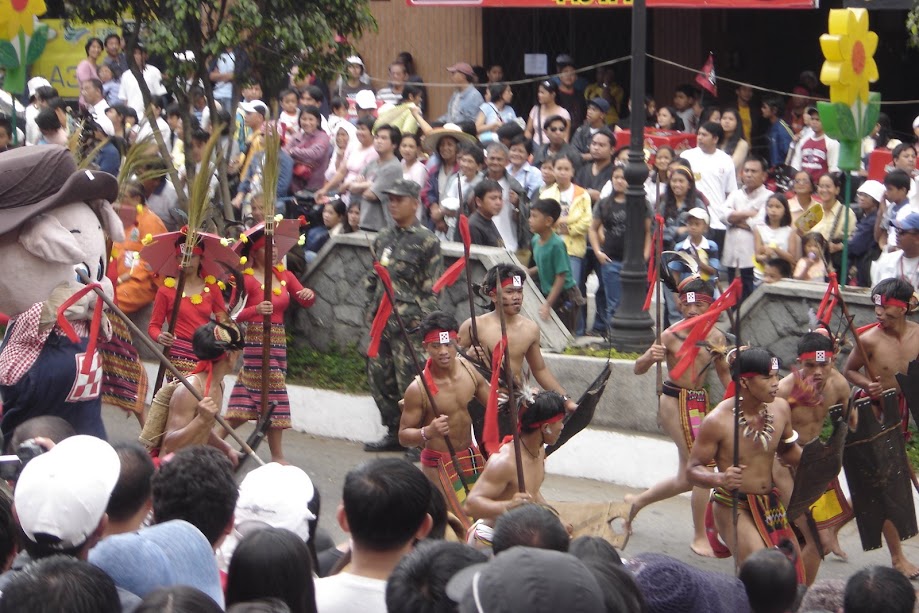 the Igorot tribe with their spears on parade 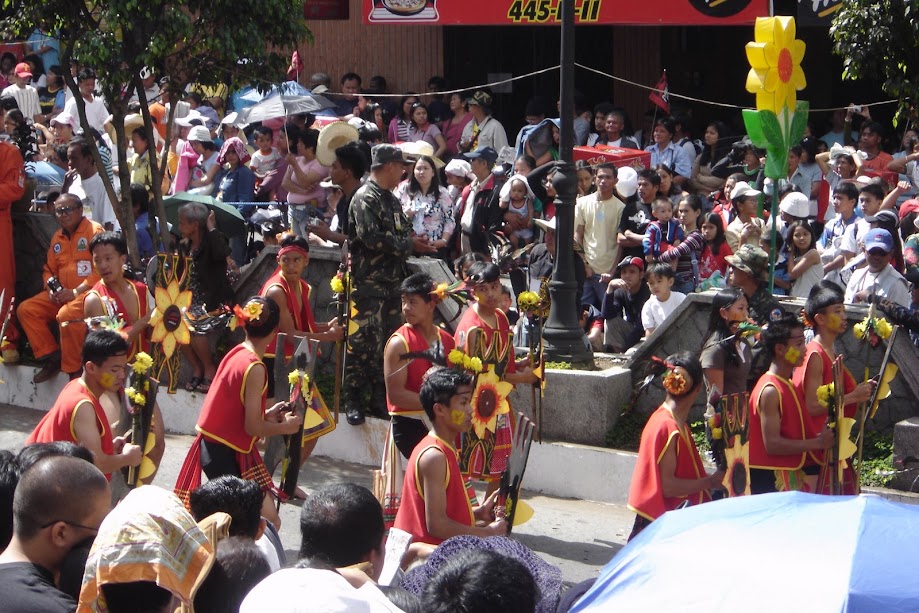 another tribal group during the parade

Wow, those two days of parade in Baguio was a great experience. I definitely felt the jubilation of a good festival experience. And I’m glad to have Panagbenga as my first experience of a Philippine festival. Even though, we have not visited the other parts of the city on this trip, it was still worth it. Maybe next time we’ll come back to go to the other sites of the city.

3 thoughts on “Panagbenga Festival in Baguio”