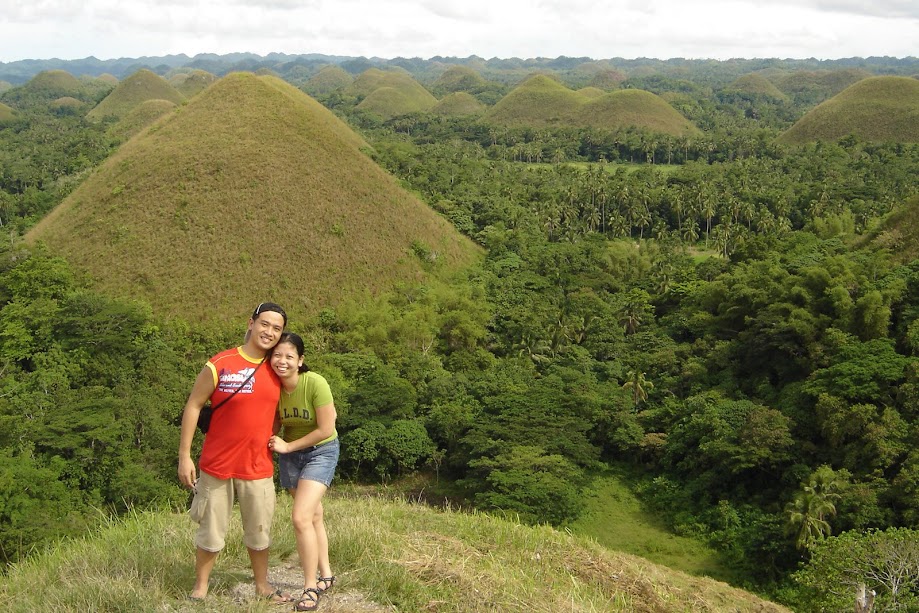 In early 2006, Cebu Pacific Airlines celebrated their 10th year of airline services and alongside with this, they’ve offered a limited seat sale of P10 only at any of their domestic flights, taxes not included.  This was such a big sale compared to the regular price.  And with this, my officemates and myself organized to purchase these very cheap air ticket and decided that we shall be going to beautiful island of Bohol and return to Manila via Cebu.  We got a total of 17 tickets that day.  To-date, Cebu Pacific still offer this cheap tickets every now and then specially during off-peak periods.

And so, we’ve decided to go to Bohol and Cebu on September 9th – 12th that year.  I was tasked to organize our trip as it was my passion to organize trips. I looked up for tour packages in Bohol and Cebu.  I’ll discuss on a separate blog our arrangements for Cebu.  From a suggestion from one of the group, I got a contact with the Philippine Tourism Authority (PTA) after seeing their website of the Balicasag Island Dive Resort.

From PTA, I was able to arrange a Bohol tour package for 3 days and two nights with hotel stays at the Balicasag Resort and the Bohol Plaza.  It also includes an overnight stay at the Balicasag resort, all meals, all transfers from airport to hotel and to the seaport, a tour to the Chocolate Hills, a cruise at Loboc River, a tarsier encounter, and other Bohol sites.  The itinerary prepared was for us to be picked up at the airport and transported to Balicasag on our first day.  On the second day, we go back to the main island four our tour and transfer to Bohol Plaza.  The third day we are to be transferred to the Port of Tagbilaran for our ferry to Cebu.  And all this was for P5000 per person only.  It was such a great package for 17 people.

Bohol is an island in the central part of the Philippines in the island group of Visayas.  It is located in the midst of other major islands of Cebu to the north to northwest, Leyte to the northeast, and Mindanao at the southern part.  Bohol being in its locations is generally shielded by major weather phenomenons like typhoons.  The island has been known for its Chocolate Hills which is a unique concentration of about 1268 hills which is an official entry to the New 7 Wonders of Nature competition.  The island is also known for its endemic creature, the Philippine tarsier which is the smallest primate in the world.  Cebuano is the dialect being spoken by most locals with Tagalog and English being their alternate languages. 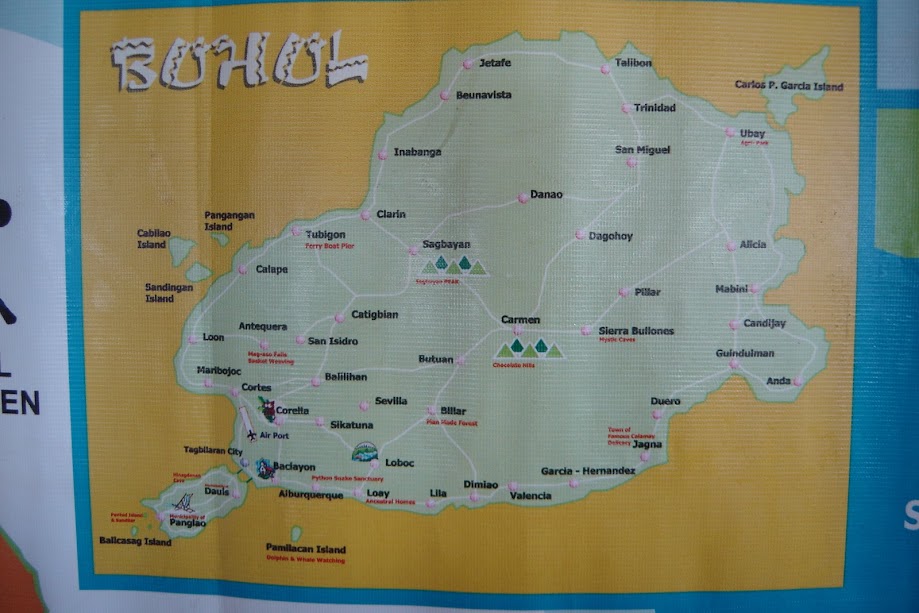 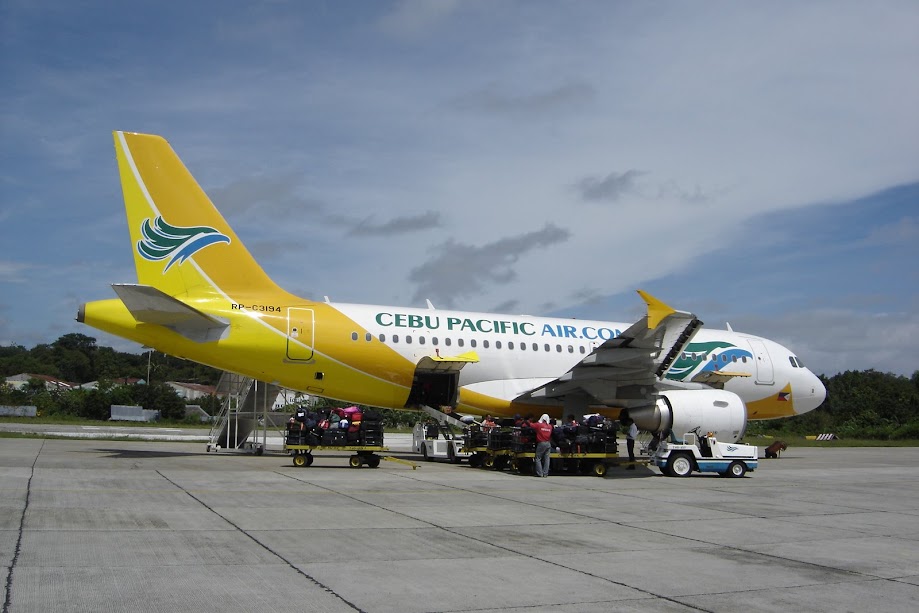 Aside from these natural treasures of the island, Bohol has become a famous destination for its beautiful beaches and its rich marine life specially on the island of Panglao.  Panglao is a smaller island at the southwest tip of the Bohol island and is connected by two short bridges. On this island, numerous beach resorts attracts tourists around the world specially along Alona Beach.

On our first day, we arrive at the Tagbilaran Domestic Airport via the earliest flight of Cebu Pacific from Manila.  Tagbilaranis the capital city of the province of Bohol.  As of this time, the nearest international airport to Bohol is the Mactan-Cebu International Airport on Mactan island.  Though, there is an ongoing project transfer the Tagbilaran Airport and convert it to an international airport on Panglao island.  Upon our descent to Tagbilaran, we were amazed at how beautiful and clear was the greenish coast of Bohol until we touch down.  It was such a beautiful sight and made us excited to go in and take a swim. 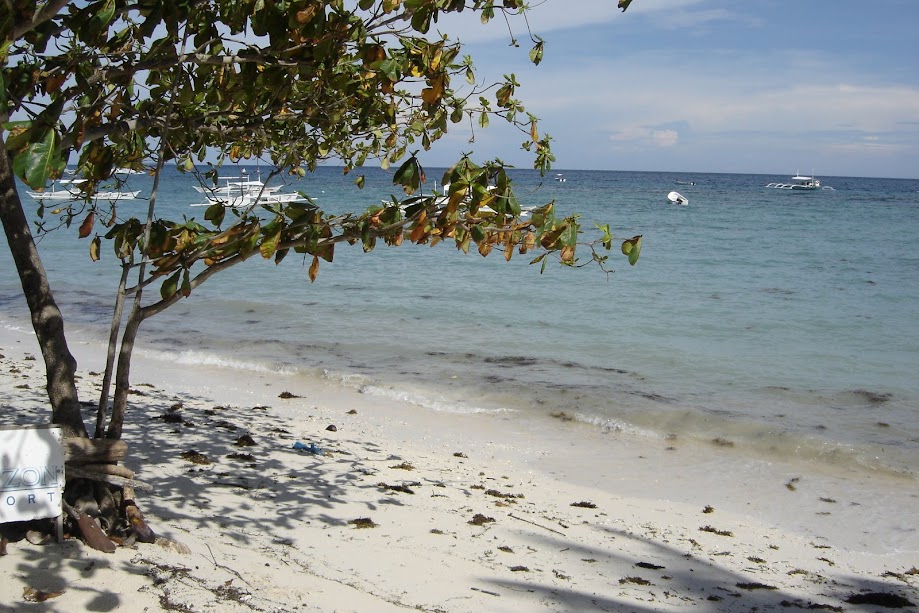 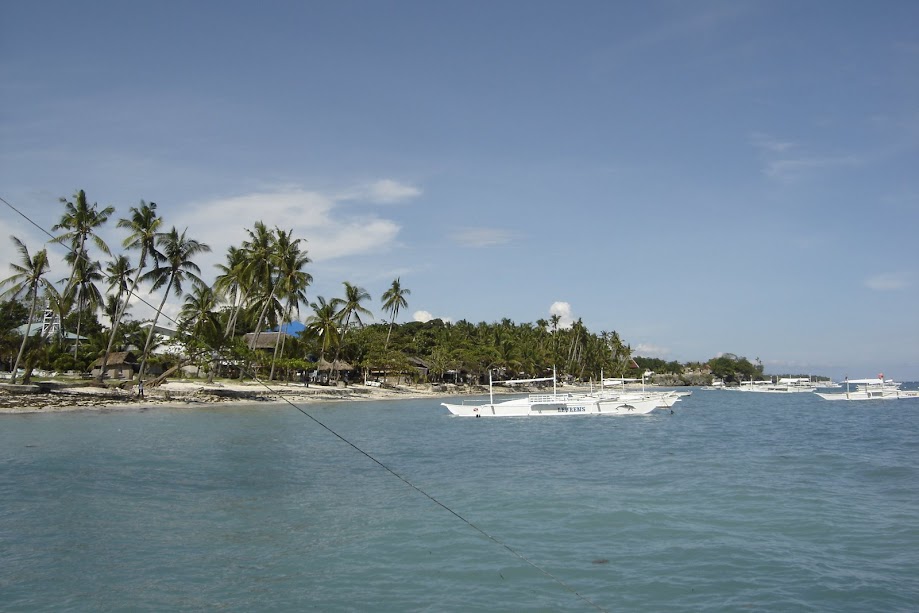 Upon arrival at around noon time, we were picked up by the representatives of PTA to bring us to Balicasag on two vans around 1:30pm.  Balicasag Resort is located on Balicasag island off the southwest coast of Panglao island.  From the Tagbilaran Airport, we drove across the bridge to Panglao island.  The drive from the northern tip of Panglao to the south end at Alona beach took about an hour ride.  On our way, I’ve noticed a number of rock formation which seemed to be old coral reefs, giving me the idea that Panglao must have been under water before.  It was interesting.  On Alona beach, we transferred to a jetty to take us to Balicasag.  The trip took about another 1 hour and passed through some rough waves as we approach the island.

It was such a long trip from the airport and the group have not taken our lunch yet.  We’re glad that our buffet lunch was already served.  With our big group, PTA has given us a very good service and treated us like VIPs.  After a quick lunch, we all retired to our designated rooms to settle for a while. 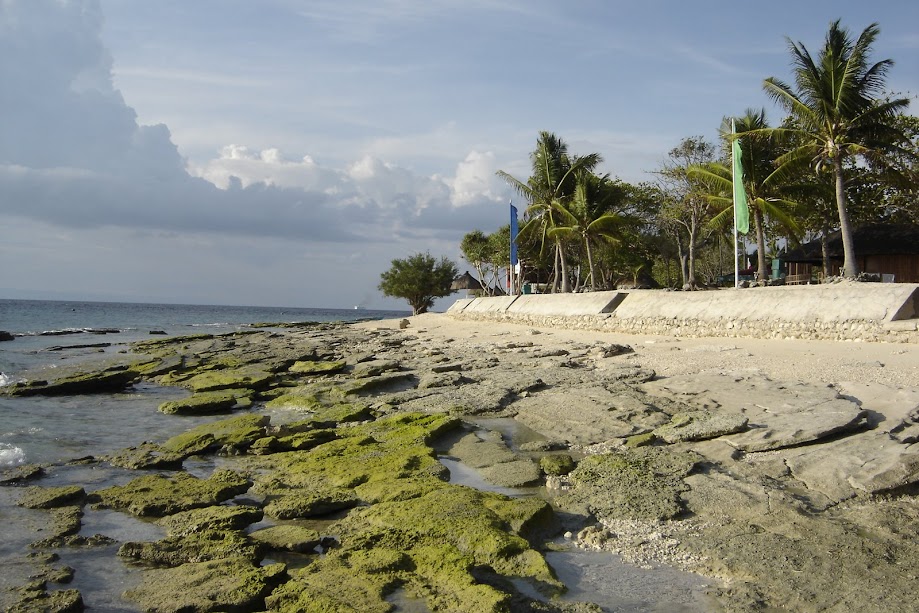 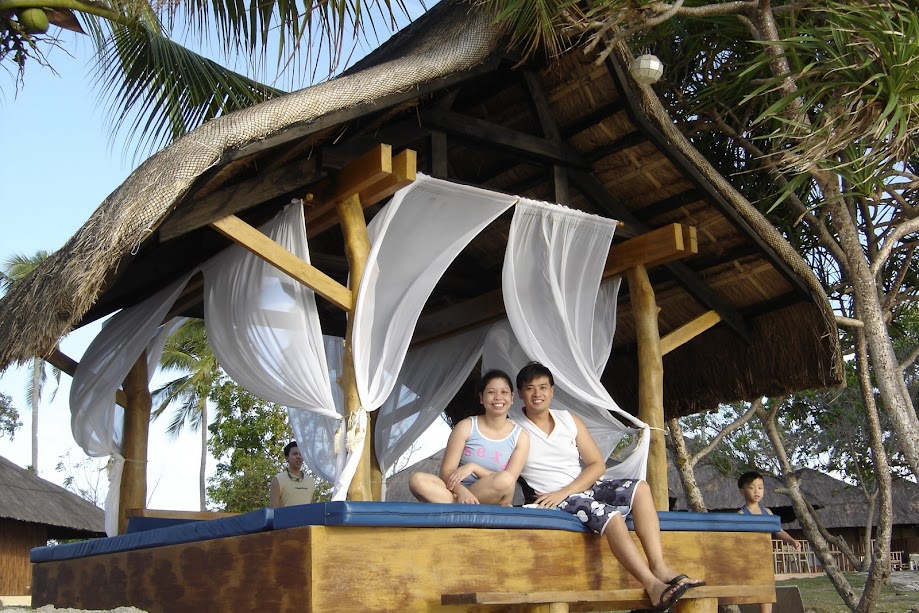 a gazebo on Balicasag 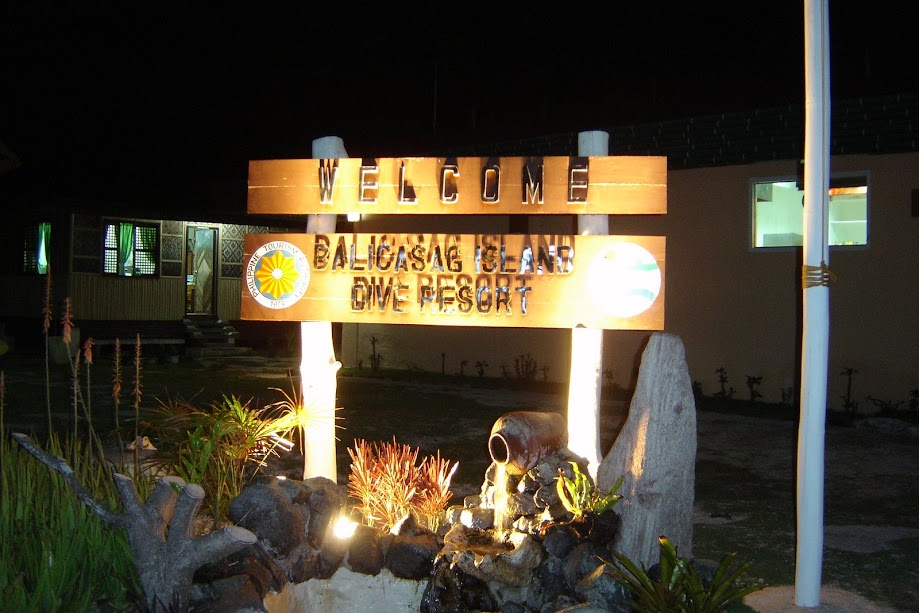 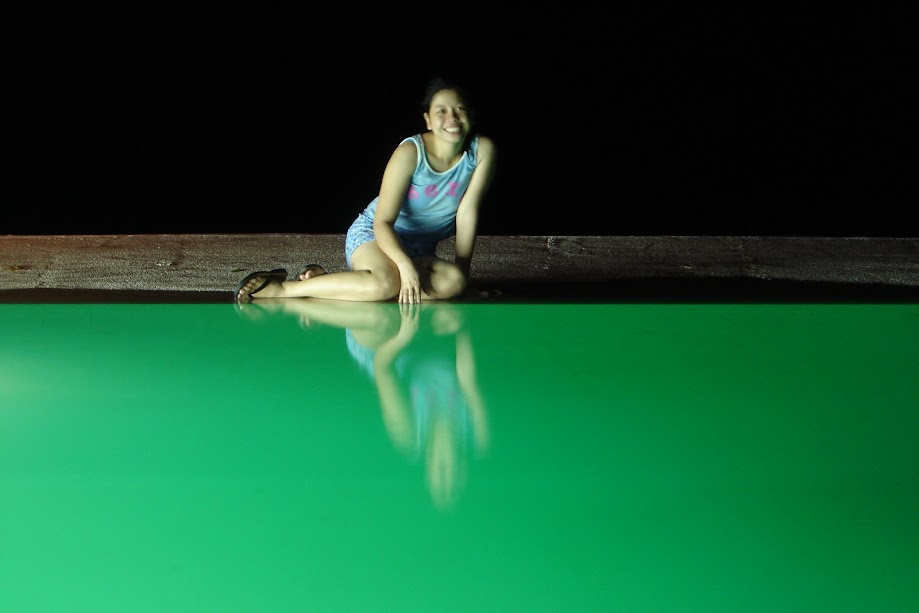 Reflections by the pool 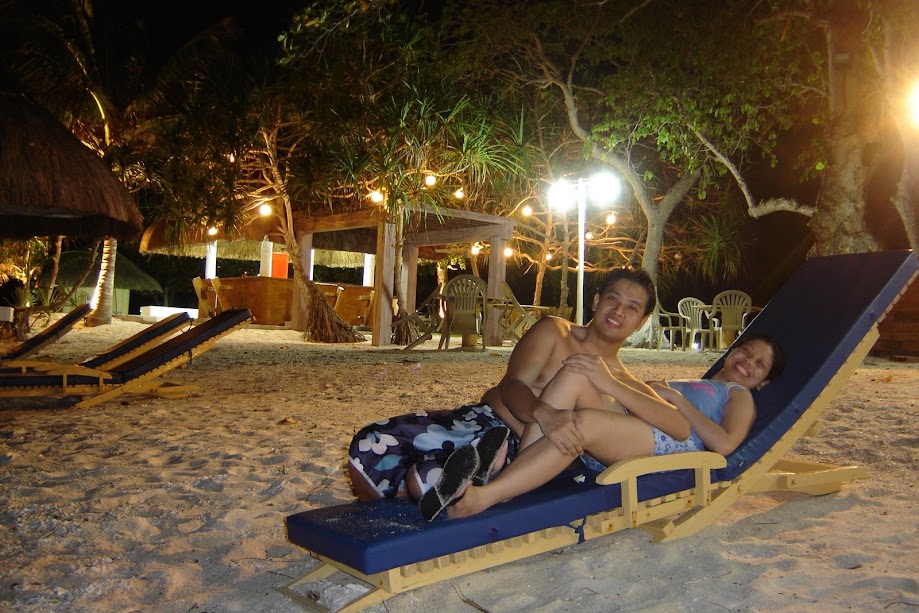 on the beach side of Balicasag Island 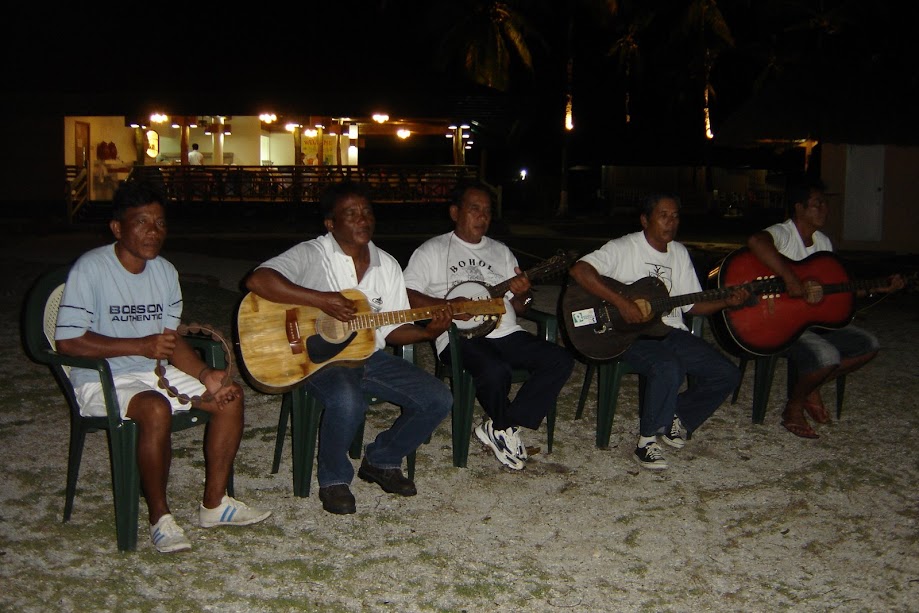 After about an hour, we have decided to go out and enjoy the waters before the sun sets as we were told that sea urchins come out of the sea side at night.  Balicasag did not have a beach side as we’ve learned that the resort is a dive site.  They did offer some diving packages for us but instead most opted just to snorkel.  They have provided us with the snorkel gears.  It had a rocky shoreline and a good location for snorkeling, but when dusk came in and the urchins came out, we decided to cut short our swimming and instead enjoy hanging out at the cabanas.  At night we’ve just spent swimming at its salt water pool.  At dinner time, our food were served along the beach and a group of men played us some music with their guitars. It was such a good service they’ve given.

The day after is going to be a long day with our itinerary.  Anyway, as early as 6am, some of the group took a time to swim specially that we’ve got a kid in the group.  After breakfast, around 9am we all start boarding our boats to get back to the island.  At first we were asked if we wanted to take a trip to Pamilacan island where dolphins usually come out on its area but would require us to leave Balicasag early in the morning.  We decided not to but we were lucky that on our way back to Panglao, a group of dolphins crossed our path.  It was great!  Anyway, we’ve all checked out from the resort as we shall be transferring to Bohol Plaza in Panglao the night after our tour. 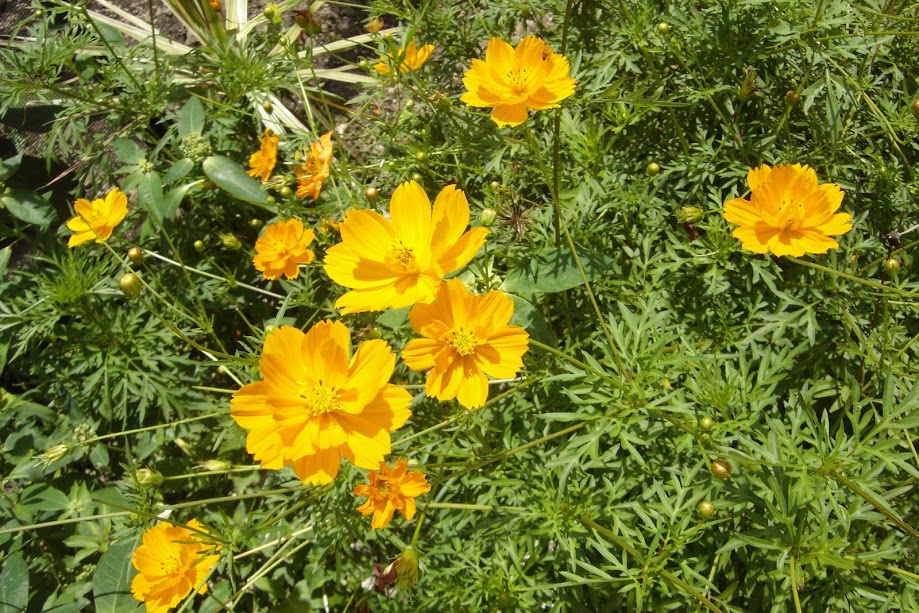 some flowers in the Bee Farm 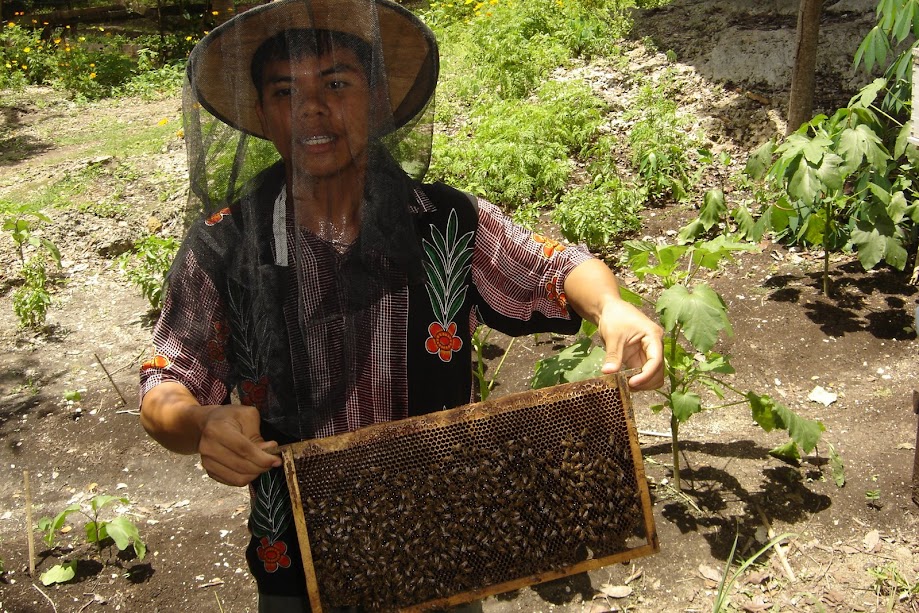 Bee Farmer at the Bee Farm of Bohol

On Alona beach we again rode on 2 separate vans due to our number.  Our first stop is the Bohol Bee Farm at Dauis, Panglao island.  On this farm, a guide showed us how they take care of a number of honey bees and on how they harvest honeys from them.  It was an educational trip for us.  Also in the farm, they’ve got a wide selection of organic farm products and flowers.  They also sell fresh honey.

After the short tour of the bee farm, we next drove to the town of Loboc to ride the cruise on Loboc River, a river made popular by the movie, Panaghoy sa Suba.  On this part of the tour, we had our buffet lunch on board a boat as we cruise through the length of the Loboc River.  On board also, as we have our lunch a group of cumbacheros play local music to add the mood of the cruise.  We were served with local food and fresh coconuts.  The river snakes through green vegetation and coconut trees.  Along the path, children are swimming on its banks and some even dangle on ropes attached to coconut trees before they take their dive.  At the top of the river, a group of guitar players met us before heading back to our docking area near the Loboc Church which is known for its famous choir group and is among the baroque churches in the Philippines listed as a UNESCO World Heritage site. 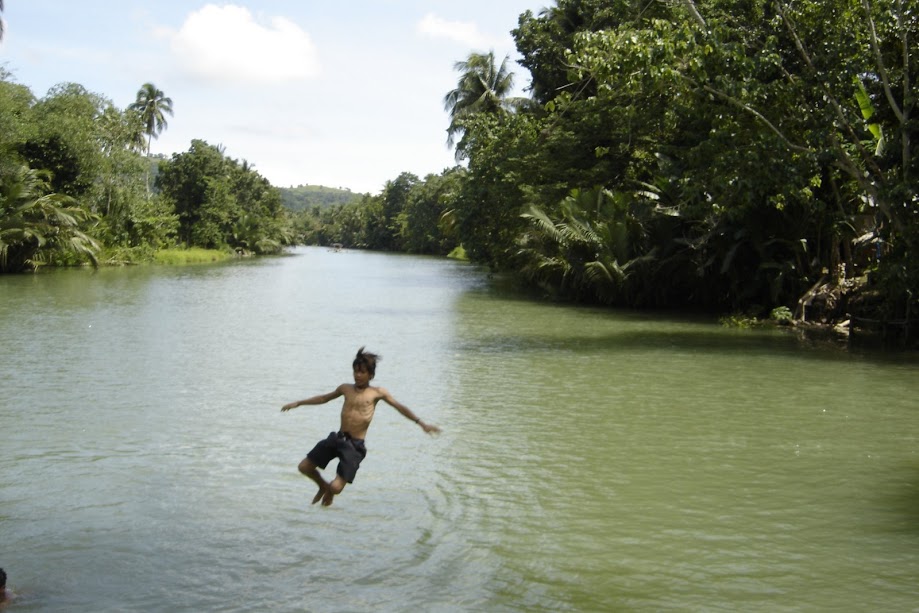 Kid mid-flight from coconut tree to the Loboc Rive 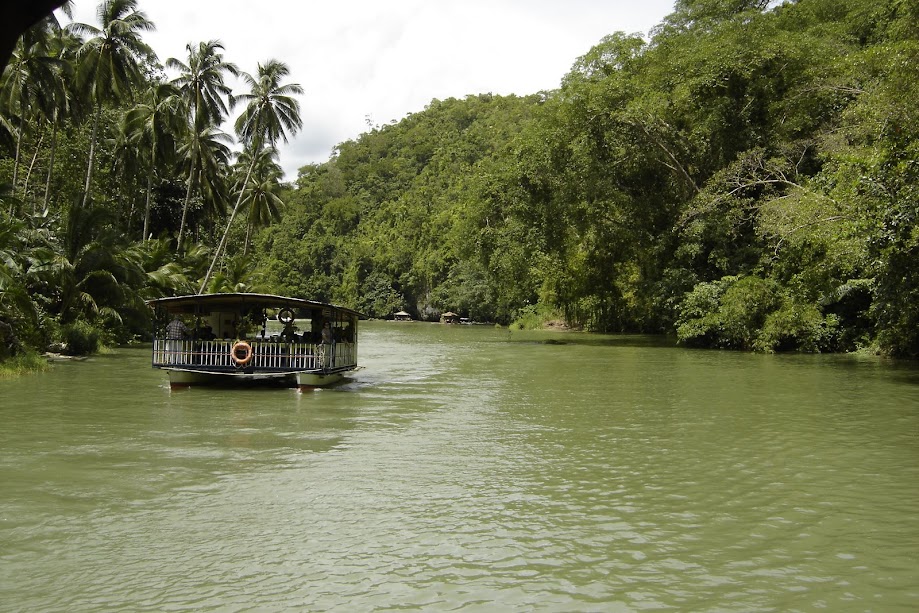 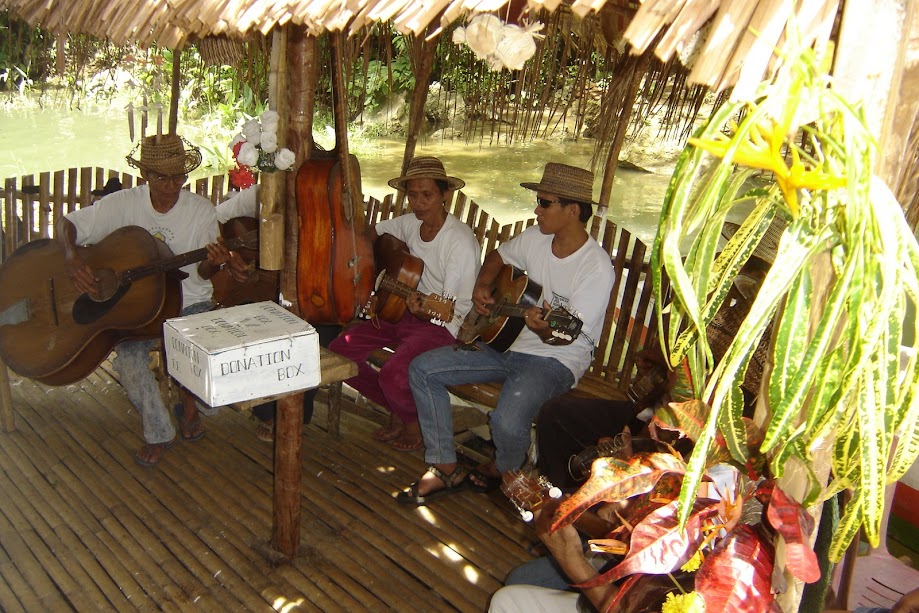 guitarists on along the river 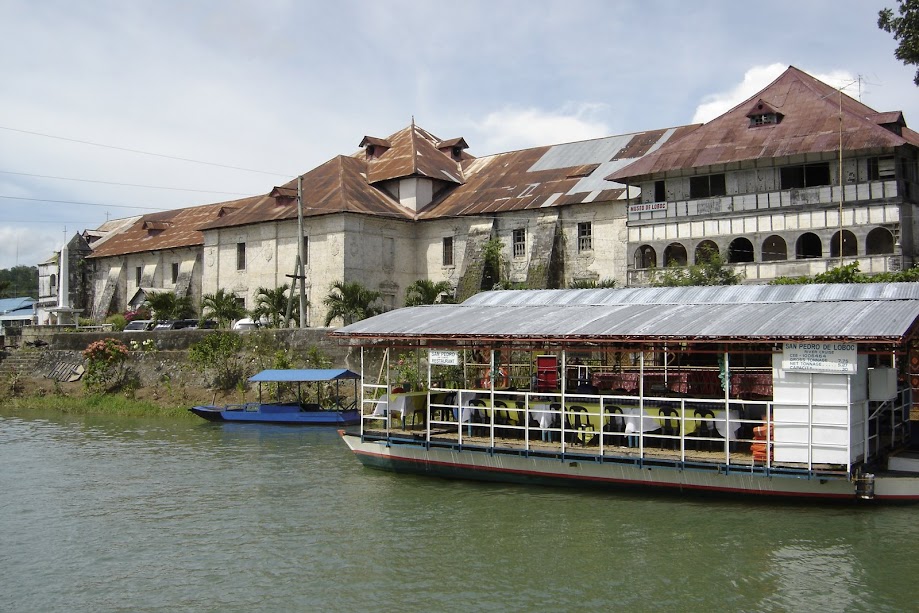 Before going to our next destination, we first take our opportunity to see some tarsiers.  Along the docking area, some restaurant owners along the banks own some tarsiers and they allow tourists to take their pictures with them.  It was actually permitted for anyone to take or hold a tarsier specially if they come from the wild.  But some of the establishments allow tourists to do so. 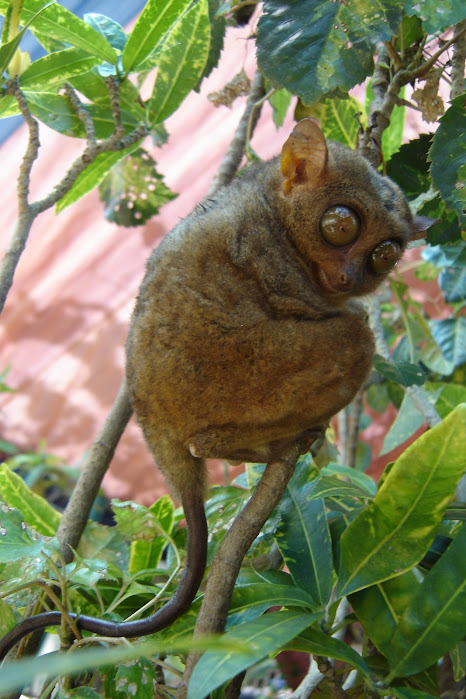 Then our next stop is at the town of Carmen at the central area of Bohol to check out the famous Chocolate Hills.  Our tour guide led us to the main view point on top of one of the hundreds of hills in the area.  And from this vantage point, one can see these beautiful hills.  At summer time, the hills lose its grassy vegetation and turns to brownish color which made the hills look like lumps of chocolates.  This is the main tourist destination of Bohol and it was such a great opportunity to see them specially now that it is being vied to be among the New 7 Wonders of Nature.  Tarsiers are nocturnal primates that feed primarily on insects.  It had big round eyes and a long tail. Its body is about the size of an adult fist.  They’re such beautiful creatures but sad to say some of them are being abused because of tourism.  Anyway, tarsiers in the wild are protected as they are among the endangered species.

Our next stop was the Baclayon Church which is considered to be one of the oldest churches in the country built in 1727.  And in connection with Bohol’s part in the Philippine history, we also stopped at the Blood Compact monument which commemorates the blood compact done by the Datu Sikatuna the local chieftain and the conquistador Miguel Lopez de Legazpi as an act of peace in 1565. 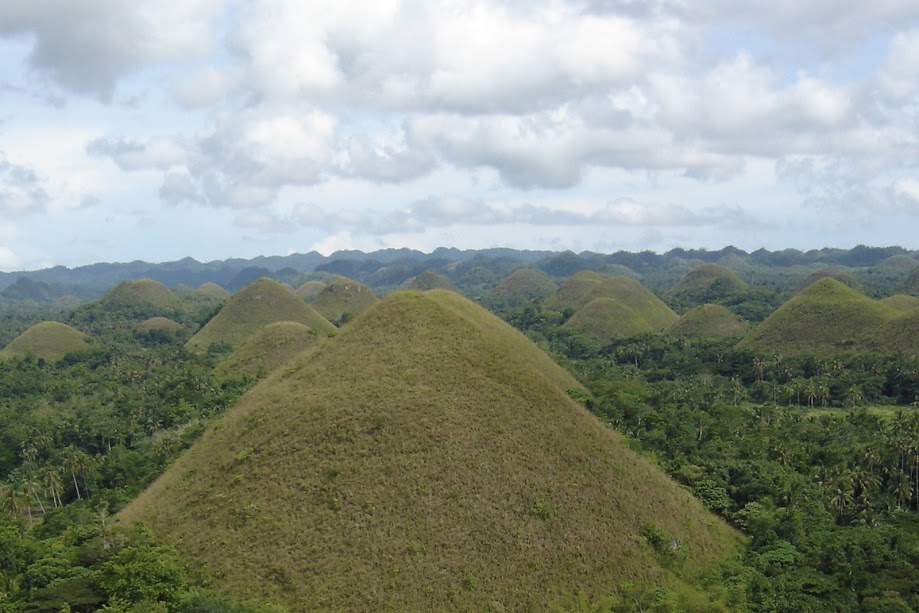 the Chocolate Hills of Bohol 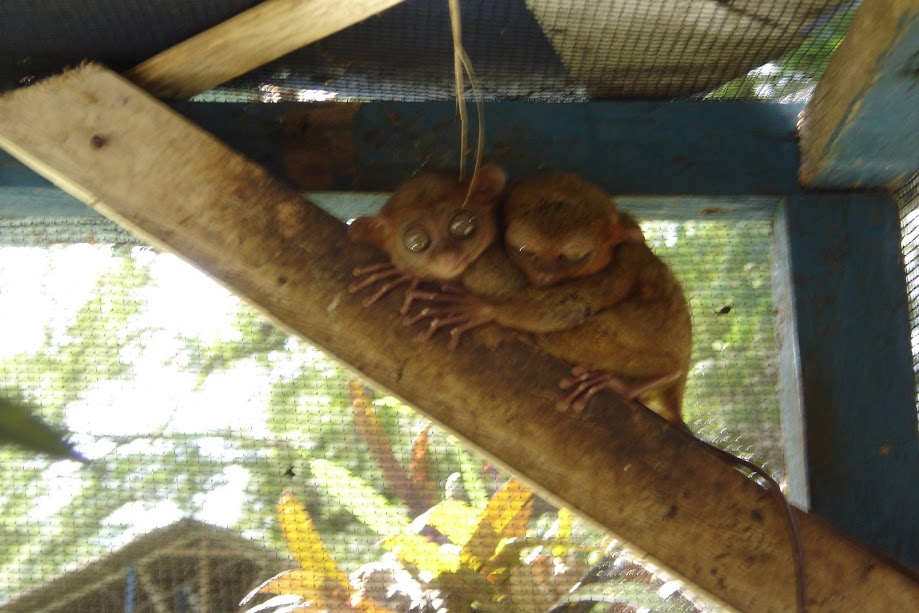 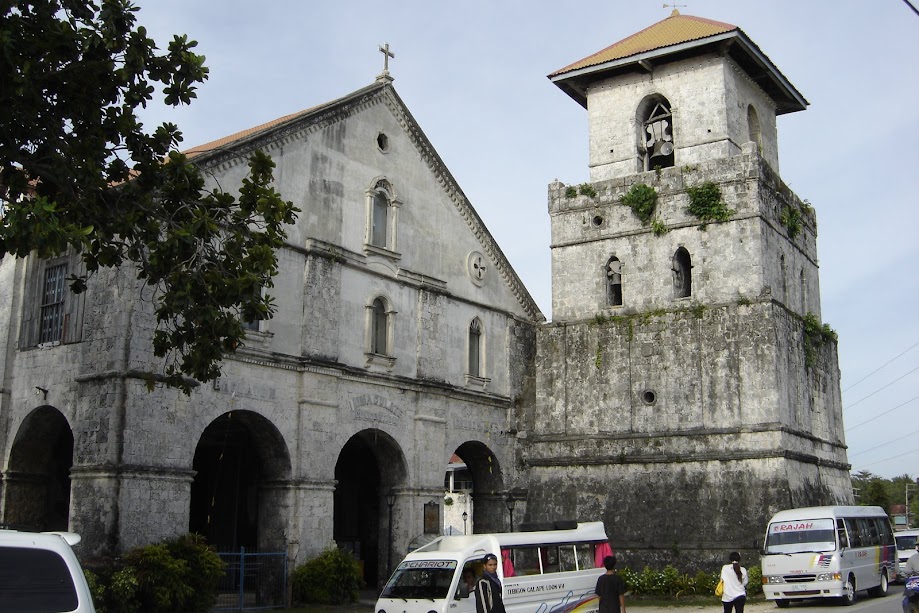 Baclayon Church, the oldest church in the Philippines 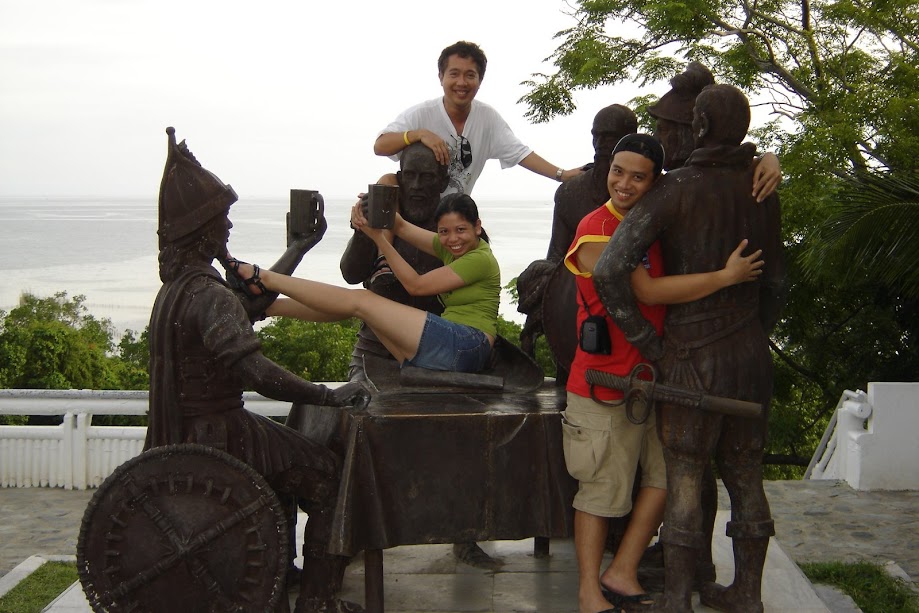 Then after a short stop at a souvenir shop for a little shopping, we checked in at Bohol Plaza Hotel for the night.

On our last day in Bohol, before noon we’ve arranged to be brought to the Port of Tagbilaran to take a ride to Cebu City where we will continue our vacation and take our flight back to Manila.

It was such a short but filled travel package by the Philippine Tourism Authority but we were able to see what Bohol has to offer.  Well I guess, 3 days in Bohol is not enough as we have not much experience the beautiful beaches on Alona beach.

*** Looking for Bohol and Philippines hotels? Check out HotelsCombined.