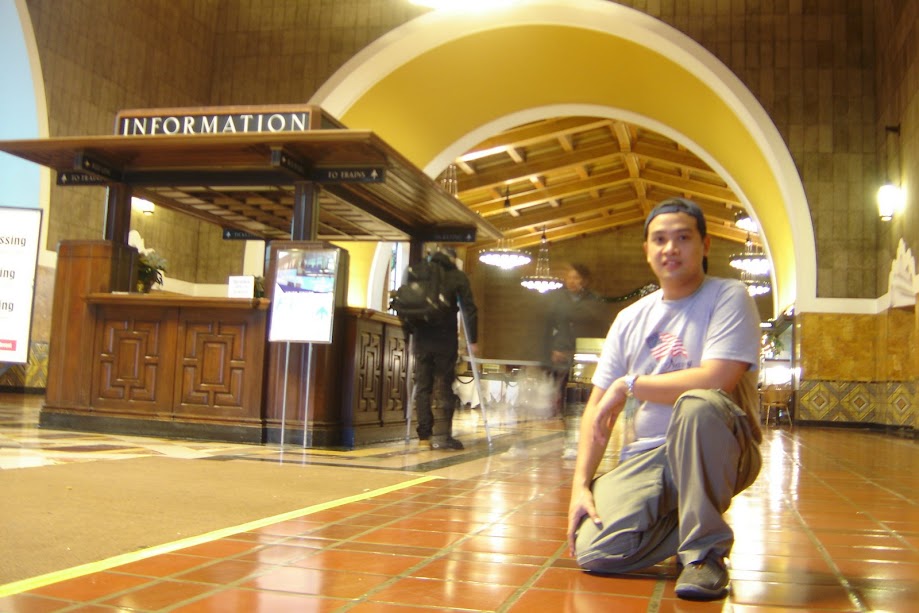 December 5th of 2007, I arrived in Los Angeles for my 1 month vacation in the United States of America (USA) to be with my family. And on the 7th, I took a ride on Amtrak to bring me to San Jose.  Since my brother is in Milpitas, I decided to stay with him for a whole week and go back to LA.

Prior to my trip to the US, I booked my trip through the Amtrak website.  My train trip leaves 7:30 AM from the Los Angeles Union Station and arrive at the Great America station in Santa Clara at 6:12 PM.  The train trip is divided into 3 legs, an LA to San Luis Obispo station, then a bus connection to San Jose, and then a short train ride to Santa Clara – Great America station.

I arrived at the Union Station in LA at 6:30 AM, since I had to still get my tickets at the ticketing station and boarding to the train is 30 minutes before departure.  Coming in to the terminal, I find myself in a beautifully interior designed station where the ceiling is wooden.  It also has this round chandeliers that light up the hall.  There are two ways to get a printed ticket for the trip.  One is using the Quik Trak machine and the other is in the ticket counter.  I had mine through the counter. 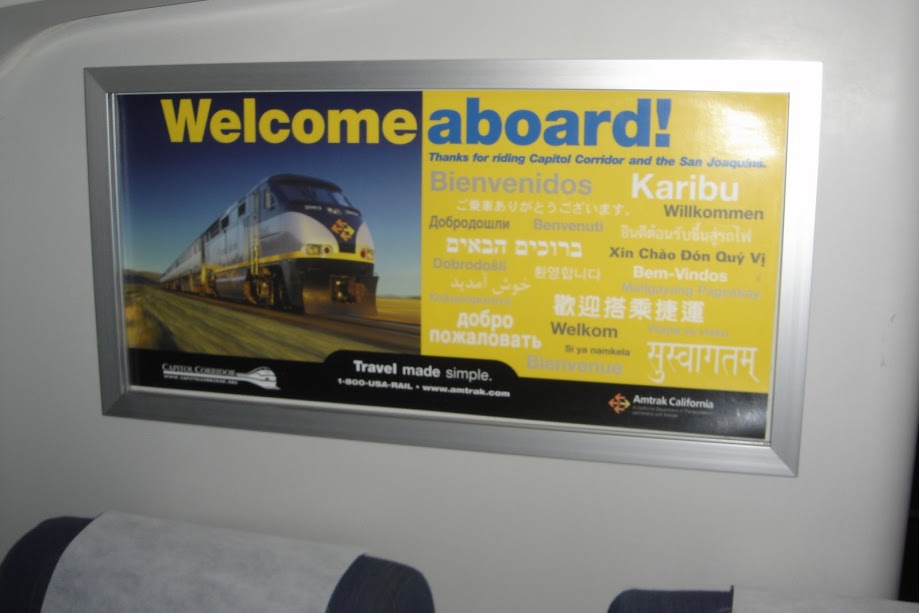 Welcome Aboard the Amtrak

After getting my ticket, I was point at Gate F to wait for my boarding.  And so I went.  The gate is situated in the middle of the station where people would line up.  Gate F is for trains that are northbound while Gate E is for southbound.  At around 7:15 AM, we were told to walk to Platform 9B where we actually board our train, the Pacific Surfliner which runs from San Diego to San Luis Obispo.

On board the train, I chose a window seat so that I have a good view of the place.  I was advised for by another passenger to sit on the left side of the train as this offered a better view on the train path.  This first leg of the train to San Luis Obispo takes about 5 hours where expected arrival is at 12:45 PM.  During this trip, I plugged in my laptop to the train and I listened into music while on the train.  From the long trip, I was happy I followed the other passenger’s suggestion as I was presented with a great view of the Pacific Ocean. 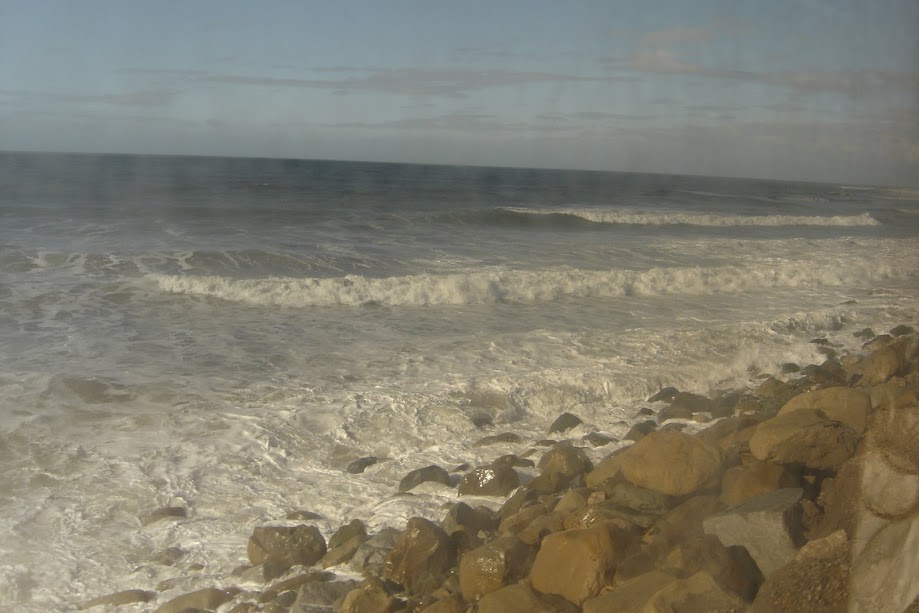 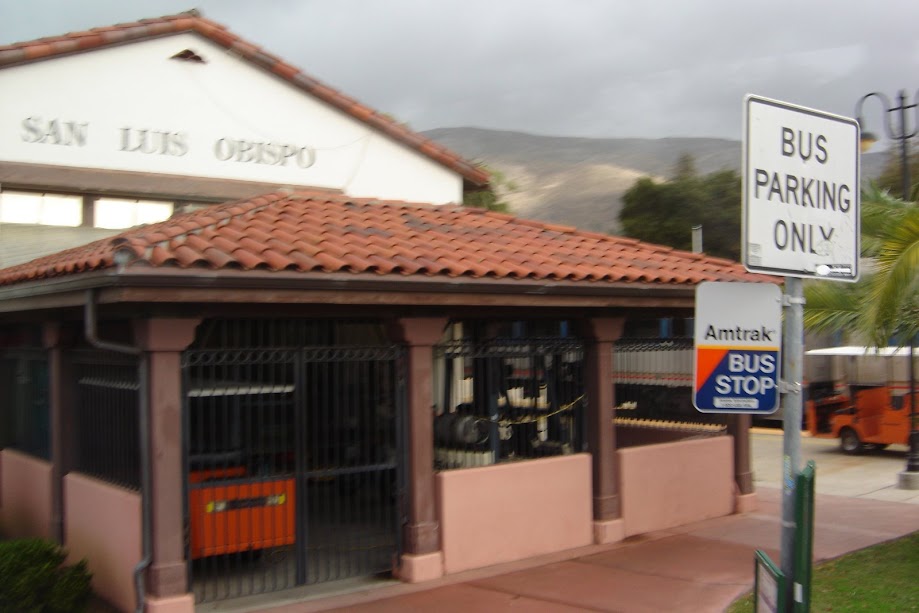 I’m glad I took this mode of transport to San Jose. The sea can be seen as early as the Oxnard station up to Guadalupe station.  But I’d say the best station is at the Surf Beach station I did not notice any platform except for this majestic sea front where the Pacific waves are high and that the long coast has turned white with the bubbles formed by the waves.  Before reaching the station also I saw cliff sides kissing the sea. Great view.

On arrival to San Luis Obispo station, each of us who are bound to the north of California had to transfer to a bus, an Amtrak bus.  It took about 4 hours for us to arrive in San Jose.  Another long drive and this time we took a stop in a McDonald’s restaurant somewhere in the middle of the Golden State. 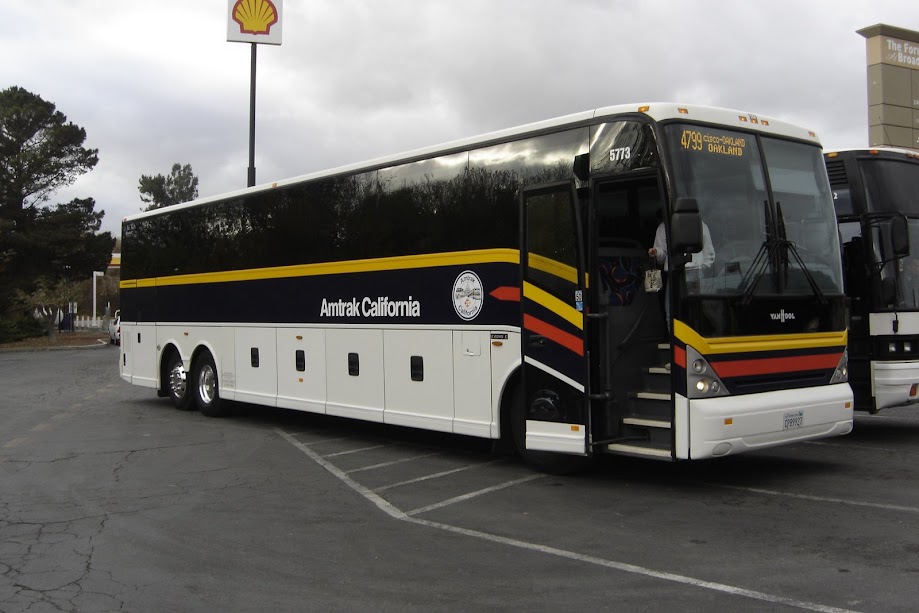 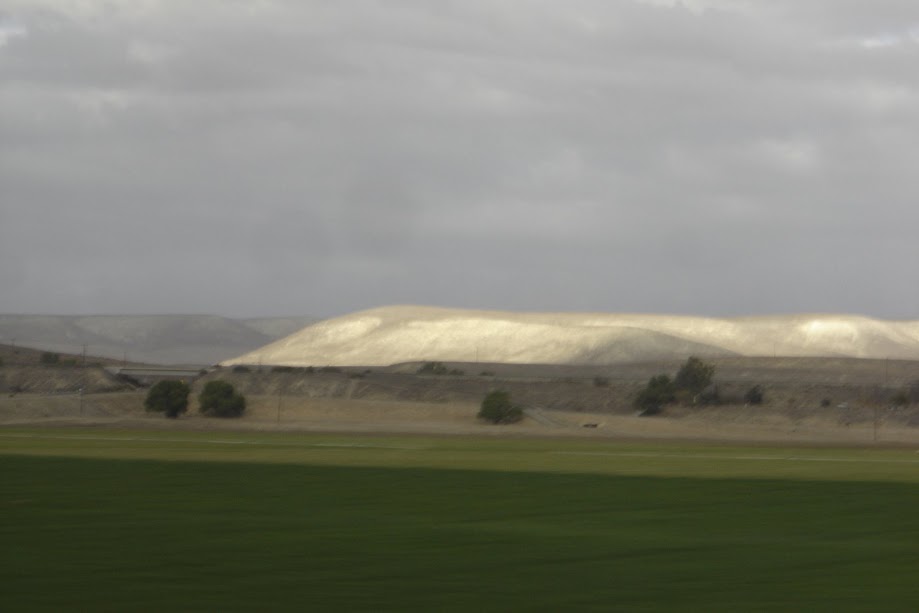 Hills that seem to glow from afar

Along the way from San Luis after seeing the beautiful Pacific coast, now we traverse through the desert like terrain of this region.  The landscape is mostly brown and plantless except for some plain areas where they have converted them into vegetable areas.  Also we passed by acres of vineyards that has gone dried by this time of the autumn season.  I can imagine how scenic that place would have been during spring time.

Then I noticed that the hills and mountains on the far end are glowing.  With a cloudy weather and some rays of the sun just jutting out the clouds.  This light as it strike the mountain side, it glowed like gold nuggets.  Maybe that’s why they called this region the Golden state. 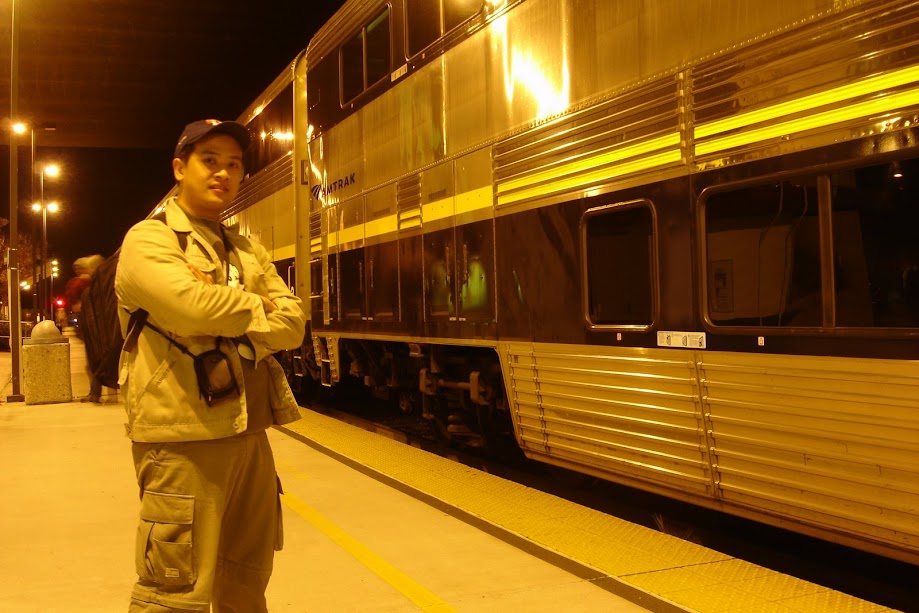 Myself at the Santa Clara – Great America station

At about 5:45 PM, I reached San Jose where I then connected to another train that is bound for Sacramento after an hour.  From San Jose, I dropped off at the next station at Santa Clara – Great America station.  The station is beneath a bridgeway and I arrived there at 6:12 PM.  Oh man, it was freezing that night!

Over-all the train and bus trip was long but it was worth the experience.

3 thoughts on “Aboard the Amtrak”